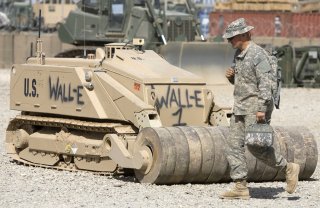 These Army robots can conduct forward reconnaissance to find high-value enemy targets, deliver ammunition under enemy fire, test the boundaries of enemy defenses and even fire weapons when directed by a human. The Army continues to discover new, previously unimagined tactical advantages associated with the development and deployment of these ground robots.

New operational possibilities are in part emerging through ongoing Army testing of its now-in-development light, medium and heavy robotic combat vehicles intended to leverage the most cutting edge current and future technologies in the areas of sensing, autonomous navigation, multi-domain networking and weapons integration.

“They maximize what humans do best and maximize what machines do best. Removing humans from the most dangerous places on the battlefield is a great thing, but we have additional tasks the robots can perform,” Maj. Gen. Ross Coffman, the director of the Army Futures Command’s Next-Generation Combat Vehicle Cross-Functional Team, told the National Interest.

For instance, by operating with an ability to confront and advance with no risk to soldiers in the face of enemy fire, while being remotely operated by a human, robots can breach a perimeter, attack and assess enemy defenses and even engage in direct combat in a way that fully fortifies and “defends” an approaching mechanized force, Coffman explained.

If manned formations in attack mode should get cut-off or detached from their larger force while conducting reconnaissance, intelligence during a high-risk scout mission, then there is a chance that soldiers could be encircled by enemy fire without protection. Robotic vehicles, however, especially those enabled with autonomous sensing and an ability to send real-time targeting, video and data to aerial drones, fixed-wing aircraft, armored vehicles on the move and of course ground command centers.

“We persistent, all-weather ground robots that can stay on the defensive and can move forward of an attacking friendly force to develop the situation,” Coffman said.

These robots can also greatly extend the battlefield given the growing capacity of long-range sensors and weapons, coupled with an ability to share data from ground-to-air-to-sea if needed, enabling an attacking force to approach, close on and possibly take over a very large area of operations.