This Robotic Combat Vehicle Will Use Artificial Intelligence to Save Soldiers 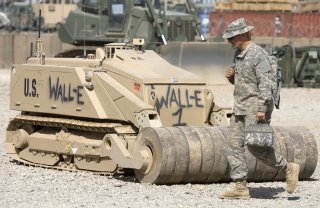 The Army is planning to arm the new ten-ton Robotic Combat Vehicle-Medium (RCV-M) with thirty-millimeter chain gun cannons, anti-tank missiles and remotely operated guns. This will enable it to conduct direct-attack missions so that soldiers won’t have to be in the line of enemy fire.

Army and defense industry officials have stated that humans will continue to make decisions about the use of lethal force. However, this does not restrict them from pushing the envelope of autonomy and potentially enabling unmanned systems to process greater volumes of information and perform a wider range of functions without needing human intervention.

“We are looking at using unmanned vehicles to expand the network and expand the line-of-sight so we can push these robots out as far as possible, so soldiers do not have to do that,” Maj. Gen. Ross Coffman, the director of the Next-Generation Combat Vehicle Cross-Functional Team for Army Futures Command, told reporters at the 2021 Association of the United States Army Annual Symposium.

The RCV-M will be capable of using a wide range of weapons, sensors and technologies. A July 2021 Congressional Research Service report on the vehicle shows that it will carry Javelin anti-tank missiles and the XM813 Bushmaster chain gun “as well as smoke obscuration measures,” the report states. These may include “amphibious kits, electronic warfare (EW) modules, counter Unmanned Aerial System (UAS)systems, and nuclear, radiological, biological, and chemical sensors,” according to the report.

Lethal direct fire missions, such as using a Javelin or Bushmaster Chain Gun, will be closely monitored by Army and defense industry officials. Also, the RCV-M could host nonlethal defensive interceptors and use them to deter incoming munitions or autonomous launch and recovery of surveillance drones. Additionally, it will be able to accommodate a wide range of payloads and potential hardware configurations—like clearing minefields. For several years, Army Futures Command has been experimenting with using robotic vehicles to clear minefields or breach obstacles that might prevent armored columns from conducting a mission. This will allow soldiers to operate at a safe standoff distance while robotic vehicles take major risks.

“What we learned is based on their mobility, their excellent mobility and their autonomous behaviors, we can actually have them move on a separate axis of advance and link up with the humans on the objective,” Coffman told the National Interest. “So, they can autonomously move without humans, link up with the humans, transfer back control, and then execute the mission. This gives the enemy multiple dilemmas.”