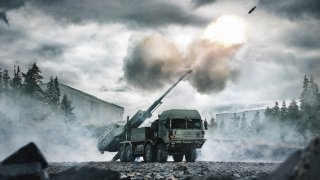 Over the summer the U.S. Army released a Request For Proposal (RFP) that called for a more mobile, lethal and survivable 155-millimeter system to replace its current fleet of towed howitzers. Last year, the Army approved the requirement to conduct a “shoot-off Evaluation” of candidate systems at the Yuma Proving Grounds (YPG), which would occur in Fiscal Year 2021 (FY21) in order to inform the U.S. Army future requirements.

Among those defense contractors that responded is BAE Systems, which proposed its ARCHER howitzer platform, a fully automated weapons system that the company said could provide highly responsive and versatile fire support to troops in combat.

BAE Systems has offered the ARCHER, which is already in service with the Swedish Army with the highest technical and manufacturing readiness levels, for participation in the Army’s planned shoot-off evaluation.

“ARCHER is a mature, proven system that can quickly get into the fight and strike enemy targets at long ranges, with a high rate of fire and very fast displacement times, and is made for combat against large power adversaries,” said Chris King, director of business development at BAE Systems, via a statement.

“With a fully automated system, soldiers can execute their mission with minimal physical exertion and time, while remaining undercover in the armored cabin,” King added. “The cab protection, fast shoot and scoot times and its extended range all enhance survivability and sustain fire support in harsh combat conditions.”

An ARCHER That Aims Quickly

The ARCHER was developed to be deployed quickly, and according to BAE Systems, the platform requires less than 30 seconds from the time an operator receives a call for fire to stop the vehicle, position for action and fire the first round. Within 30 seconds after the fire mission is accomplished the vehicle can be on the move again.

The howitzer has a range of up to 40km with conventional 155-millimeter ammunition and 60 kilometers with precision-guided munitions including the Excalibur. It can also fire the BONUS anti-armor munitions to a distance of 35 kilometers.

The vehicle can carry twenty-one complete rounds, which can be fired from fully-automated magazines in just two and a half minutes. While typically operated by a crew of three to four soldiers, including a gun commander, gun operator and driver, a single operator can control the entire gun system from the safety of the armored cabin, which offers four workspaces.

It is a fast-moving vehicle as well with a road speed of up to 45mph (70km/h), while it was also developed for mobility in rugged terrain. The complete platform is also compact enough that it can be transported by aircraft such as the C17 or A400M “Atlas.”

If any BAE Systems’ ARCHERs are sent to Yuma for testing the platform(s) could be there for a while. The Army’s RFP noted that hardware will remain at the YPG through the entire testing window, while support personnel will be required for the shoot-off evaluation.

ARCHER is manufactured by BAE Systems Bofors, which is based in Karlskoga, Sweden.