BONUS: The Army Just Purchased This 'Smart' Artillery Shell. Here's What It Can Do. 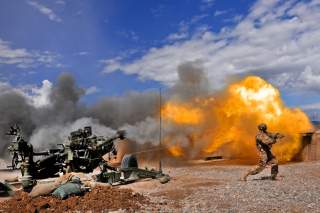 The U.S. Army has ordered a European smart artillery shell with sensor-guided sub-munitions.

The BONUS is a 155-millimeter shell by BAE Systems Bofors and France’s Nexter, and produced by a BAE factory in Sweden.

BAE describes BONUS as a “fire-and-forget munition capable of successfully combating any armored vehicle. Compatible with the majority of existing artillery guns, BONUS is handled just like a conventional shell. When launched from any 155-mm artillery system, the BONUS carrier shell separates to deploy two sensor-fuzed munitions that then search for targets within a given footprint, up to 32,000 square meters [38,271 yards].”

BONUS is a heat-seeking anti-tank system. “Multi-mode sensor BONUS detects and identifies targets by processing signals received from passive infrared (IR) sensors covering multiple wavelengths,” according to a BAE/Nexter press release. “The system then combines the results with signals received from the profile sensor to separate combat-worthy targets from false targets.”

Each of the two sub-munitions detects and attacks its own target, using Explosively Formed Penetrators. The scourge of U.S. forces in Iraq and Afghanistan who encountered them in IEDs, an EFP is a shaped-charge device that comprises a piece of metal inside the munition that is molded into a projectile and fired at the target.

“The munition’s high spin rate, high speed of descent and absence of a parachute make it virtually undetectable and therefore undefeatable,” says BAE/Nexter. The manufacturers also state that “using a combination of sensors, BONUS is effective against targets that use both passive and reactive protection systems.” If true, then this suggests that BONUS is effective against regular armor plate and explosive reactive armor charges on the outside of a vehicle that detonate to destroy anti-tank rockets. But this still leaves active protection systems like Trophy, that launch projectiles to shoot down anti-tank munitions.

The BONUS shell is a base-bleed design, which uses a gas generator in the shell to generate a gaseous flow that reduces drag and extends range. The shell has a maximum range of 35 kilometers [21.7 miles]. The shell can be fired by any 155-millimeter artillery piece, including the M109 self-propelled howitzer and the M777 towed howitzer.

Other countries that use BONUS include Finland, France, Norway and Sweden. BAE declined to specify the quantity of shells ordered by the U.S. Army, or the cost of each shell.

The BONUS buy comes as the U.S. Army is turning away from years of focusing on counterinsurgency against technologically weak opponents, to prepare for “big war” against potential adversaries like Russia and China, who field sophisticated weapons. Russia in particular has an artillery arsenal that arguably surpasses America’s, deploying advanced weapons such as the 2S35 Koalitsiya-SV 152-millimeter self-propelled howitzer as well as a variety of multiple rocket-launch systems. Recently, Russia has been refurbishing its mothballed Cold War heavy artillery, including the 2S4 Tyulpan 240-millimeter mortar and the 2S7 Pion 203-millimeter howitzer.

U.S. artillery has been somewhat neglected in recent years, a result of counterinsurgency warfare in Iraq and Afghanistan where airpower proved a much more flexible instrument than relatively ponderous artillery for small-unit warfare. But facing potential opponents with strong air forces and air defenses, the air support that American ground troops have relied on since World War II may no longer be available when needed. Thus, the U.S. military is now talking of cannon that can shoot a thousand miles and extended-range shells that will enable existing howitzers to shoot further.

What’s interesting is that ten years ago, BONUS might not have seemed so attractive: Al Qaeda and the Taliban didn’t have any armored vehicles. But Russia and China do, and lots of them. A smart anti-armor artillery shell might prove very useful in a mechanized war between major powers.

The Army's 155mm 'Big Guns' Now Have More Range, Can Strike Without GPS