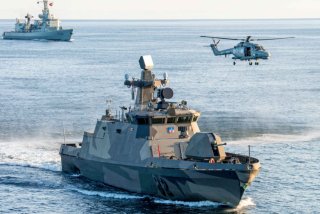 NATO allies recently kicked off Baltic Operations (BALTOPS) 2022, a maritime-focused training event in the Baltic region, in tandem with Finland and Sweden, two NATO partners that are poised to join the alliance.

"During BALTOPS 22 NATO's Combined Air Operations Centre (CAOC) at Uedem, Germany will direct all air operations and synchronize them with the maritime activities, with the focus on freedom of movement and security in the Maritime Domain," said Maj. Gen. Harold Van Pee, commander of CAOC Uedem, in a U.S. Navy statement about the exercise.

"In these challenging times, we are proud to support this long-standing exercise that enables complex and meaningful Air-Maritime-Integration for our Allies and Partners."

This year’s BALTOPS event marks the fifty-first time that the maritime military exercise has occurred, with the first iteration of the event held in 1972. The U.S. Navy also explained that the training will be linked with the 500th anniversary of the Royal Swedish Navy, as well as the Multinational Air Group Days exercise, a German-led “stepping stone of combined interaction and operations.”

“Starting in Stockholm, Sweden with a Pre-Sail event, and ending in Kiel, Germany, the training will have two more phases: a combat enhancement training and a force integration training with a tactical segment of air defence to strengthen the cohesion and capabilities of NATO Allies and Partners in all three domains—air, land and sea,” the statement explained.

“The main aim is to further interoperability in the sector of amphibious and freedom-of-navigation operations, maritime interdiction, anti-submarine warfare, mine countermeasures, medical evacuation at sea and joint personnel recovery to demonstrate both NATO's defensive nature and the readiness to defend the Baltic region.”

A total of fourteen NATO countries will participate in BALTOPS. The U.S. Navy explained that the event will include over 7,000 sailors, airmen, and marines, as well as a total of seventy-five aircraft and forty-five ships.

Though not yet official members of NATO, Finland and Sweden have applied for membership and appear likely to join in the near future, despite objections from Turkey over Sweden’s support of Kurdish groups that Ankara considers terrorist organizations.

The event comes at a precarious moment in European security. Amid Russia’s invasion of Ukraine and concerns in Europe about the Russian Navy’s ability to disrupt commercial shipping in the European periphery, the flexing of NATO’s nautical muscles comes at a very crucial time.