The Battle of the Bulge: Hitler’s Desperate Gambit Crushed by American Grit 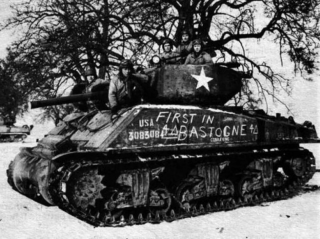 (Editor's Note: Read part one of this two-part series here.) In early December 1944, the Allies sent the 101st Airborne Division—which had been battered in heavy combat almost non-stop since they parachuted into Normandy in June—into a quiet sector to rest, recover, and refit. The Allied leaders selected a perfect spot for the rest: near a small, quiet, obscure town called Bastogne.

With the Germans seemingly in retreat all along the front, it also seemed like the perfect opportunity to insert the newly formed 106th U.S. Infantry Division—which had just landed in Europe the first week of December—into the line so they could slowly get accustomed to battle prior to the expected Spring 1945 push into Germany itself. The division was placed in the most quiet sector, the Ardennes Forest, along what was known as “the ghost” front. On the other side of the line, however, things were far from quiet.

Hitler had first shocked his General Staff with the news of his decision to launch a massive attack against the Allies—which would eventually be known as Wacht am Rhein (Watch on the Rhein)—on 16 September 1944 in his Wolf’s Lair hideout. The disposition of forces briefed to Hitler at that meeting was that the Allies had ninety-six divisions on the ground and another ten on the way from England. On the German side: fifty-five weak and weary divisions. The generals were consumed with trying to come up with creative ways to keep from being buried in the onslaught of the Allied pressure; the idea of going on the offensive was insane to them.

Yet there was a kernel of logic to Hitler’s decision. Had he simply played out things with conventional operations, it was 100 percent certain his troops would methodically be worn down through attrition and the sheer weight of what the Allies could bring to bear.

With German industry was under constant bombardment by Allied air, and the German Wehrmacht was in a life and death struggle in the east against the surging Red Army and in the south by the advancing U.S. and U.K. armies in Italy, there were no more German men left to rebuild new divisions.

The United States all by itself, however, had approximately 12 million men under arms at this time, and would be able to relentlessly build as many ships, planes, and army divisions as they desired. Hitler correctly realized that taking a huge gamble in the Ardennes to split the Allied Armies and cut off their lines of supply was his only hope of even slowing down his defeat.

In mid-November, the German Army began preparations by secretly moving large numbers of troops, tanks, and ammunition from other parts of Germany and massing them opposite the Ardennes—the place the Allies thought least likely for Nazi panzers to appear. Showing considerable skill, the Germans were able to covertly build up all the troops and material they needed, without causing undue alarm among the Allies and were successful in preventing Allied intelligence services—which were aggressively seeking information on their enemies—from accurately detecting the plan for the attack.

In dense fog and in the pre-dawn hours of December 16 , the first of 250,000 German troops began pouring across the now misnamed “ghost front” and into American lines. One of the first to feel the heat was the green and untested 106th Infantry Division.

Many of the troopers had gotten sick in the awful weather. Hundreds were suffering from trench foot. Most of the men were shocked out of their misery, however, by a massive artillery and heavy mortar barrage that was unlike anything the Americans had ever seen. When daylight arrived, the ground was blanketed in dense fog that prevented American air from flying, denying the U.S. troops any updated intelligence on what was happening, where the Germans were coming from—or most critically: air support.

The experienced Wehrmacht troops raced across the battle lines and began attacking the 106th Division immediately, conducting a skilled maneuver against the Americans. Barely one day into the attack most of the infantrymen were surrounded and cut off. Within days the division was cut to pieces and lost the ability to effectively offer resistance. For all practical purposes, the division had been destroyed.

Instead of surrendering—and though totally surrounded—the 101st fought on, denying the Germans a critical road network they needed to continue the momentum of their drive for Antwerp. It was the first of what would be many examples of American grit and determination in the face of overwhelming odds. Meanwhile, the German main armored thrust continued towards Antwerp.

The main effort of the attack was the 6th Panzer Army. Hitler hoped that his panzer troops would reprise their blitz across France in 1940 by making major breakthroughs and then racing into the enemy rear. But owing to relentless U.S. bombing of German positions throughout the theater, the panzer forces were not able to marshal enough fuel with them to make it all the way to Antwerp. To succeed, they would need to capture U.S. or British stockpiles of gas along the way.

But as the battle progressed and the Americans got over their initial shock, U.S. infantry and mechanized troops began to fight tenaciously and viciously, inflicting severe damage to the attacking Germans. As the 6th Panzer Army continued its push towards Antwerp, the United States increased the pressure, causing serious delay to all planned Wehrmacht movements. The Germans would not have the ability to race through enemy lines as they had in 1940.

By December 23, the 6th Panzer Army’s lead unit, the 1st SS Panzer Division, exhausted their fuel. Because of American counterattacks and effective rearguard actions, the panzers could not get to additional fuel depots in time. They ran out of gas and they literally abandoned their tanks, moving back in defeat to German lines on foot.

From that point forward, the United States was again back on the offense. The German offensive had failed. By the end of January the original lines had been restored, and shortly thereafter the Allies began the terminal drive to Berlin. Hitler’s last gamble had failed and his end guaranteed by fierce American resistance.

The battle turned out to be the biggest in American history, eventually including some 600,000 total troops. The victory was costly, however. U.S. casualties in one month amounted to approximately 19,000 killed, 62,000 wounded, and an estimated 26,000 more captured. Hitler had committed almost a half million troops to the fight. His gamble cost his soldiers upwards of 100,000 casualties.

And sealed his loss in the war.