Battle of the Bulge: Hitler Sets One Last Trap 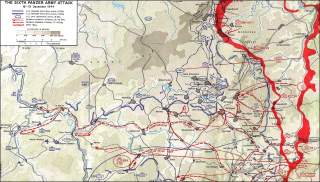 (Editor's Note: Read part two of this two-part series here.) The Battle of the Bulge, fought in Europe in the winter of 1944–45, was the largest fight ever undertaken by the United States Army. It marked the final offensive action of the German Army in the west, and the Allies eventual victory signaled the certainty of Germany’s eventual defeat. But for a relative few gallons of gas, however, the German armor might have been able to win the battle and turned the war into a bloody World War I-type stalemate.

World War II had begun in 1939 with Germany’s blitzkrieg victory over Poland. The next year saw them crush France in a matter of weeks, placing German army and air force units across the channel from the UK. But after Hitler’s dream of invading England had died at the Luftwaffe’s loss to the Royal Air Force in the Battle of Britain, the Fuhrer realized his budding empire was itself vulnerable to enemy invasion. Beginning in 1942 he ordered the construction of fortifications along the French coast known as the Atlantic Wall.

Hitler did not intend to leave the security of his borders up to fortifications in France, if it came to that, as he had secretly begun construction in 1936 of western border fortifications called the Western Wall, or Siegfried Line. But as he demonstrated throughout the war—sometimes with brilliant results and other times with catastrophic outcomes—Hitler hated the pure defense and preferred the offense. Both were to come into play in the Battle of the Bulge.

The Third Reich’s march to death effectively began in August 1943, when Hitler’s last offensive on the Eastern Front ended in predictable failure. Not being satisfied with the spectacular victory his panzer forces under Field Marshal Erich von Manstein had just won against the Soviets in the 1943 Battle of Kharkov, he chose an ill-conceived offensive at Kursk.

The Soviet divisions blunted every German incursion and by sheer force of superior numbers and short lines of resupply, smashed the vaunted Wehrmacht forces. Hitler’s forces could now only conduct delaying operations as the Red Army began a relentless push west. The Germans’ strategic situation went from bad to worse as one month after Kursk, the U.S. and UK forces invaded southern Italy and began a drive north.

In June 1944 the final pike driving towards Berlin began piercing Hitler’s Reich when the Allies successfully breached Germany’s Atlantic defenses in Normandy. This began a slow, methodical drive off the coastal areas and further into France. Hitler was now being effectively pressured on three fronts. If he were to have any chance of blunting the Allies’ drive towards his capitol, Hitler would have to dramatically change the conditions in the west.

By the fall of 1944, the Allies’ push was starting to bog down. Their relentless pressure was beginning to take a toll on themselves, as their troops were nearing exhaustion and the lines of communication and resupply were dangerously extended from northern France and the port at Antwerp, Belgium. Hitler decided this was his moment to strike.

Many have ridiculed his efforts as being obviously futile and doomed to failure, but that was only certain in hindsight. Removing all emotion and issues of morality from the equation, and viewed on purely strategic grounds, Hitler’s decision and actions actually had some merit. If he was not going to sue for peace or surrender—which would have made the most sense—he had to do something to change the dynamic in the West.

The trends and momentum were fatally in the Allies’ favor, and if nothing else changed, then when the weather turned better in the spring of 1945, Germany’s defenses would be methodically dismantled until they were utterly destroyed. The only window of possibility for Hitler to try and turn the situation on its head was in the heart of the winter of 1944—and for that to work, the Allies had to take their eyes off of the ball.

And the Allies obliged.

It made sense from the perspective of Supreme Allied Commander, Gen. Dwight D. Eisenhower to allow his forces to take a breather. His troops had been on a relentless pursuit of Germans for more than five months without pause. They had suffered enormous casualties, lost untold numbers of tanks, artillery pieces, aircraft, and other tools of war. His men were exhausted and in need of a respite.

Moreover, the weather had turned awful in December 1944, making any movement treacherous and plodding—hardly ideal conditions to conduct offensive operations. Even more “obvious” to Eisenhower was that the German troops were in even worse shape. The idea that they would launch an offensive while the Allies relaxed a bit and caught their breaths was considered unlikely to the point of unthinkable.

In fact, rumors were spreading throughout the theater among the American troops that Hitler would soon surrender, the war was all but over, and any day troops would start going home—some in time for Christmas. How tragically wrong events would prove all such hopes. While the Germans were definitely battered and gravely wounded, they were about to prove that they nevertheless had considerable fight left in them.