Battlecarrier! The Cold War Hybrid Between Battleships and Aircraft Carriers 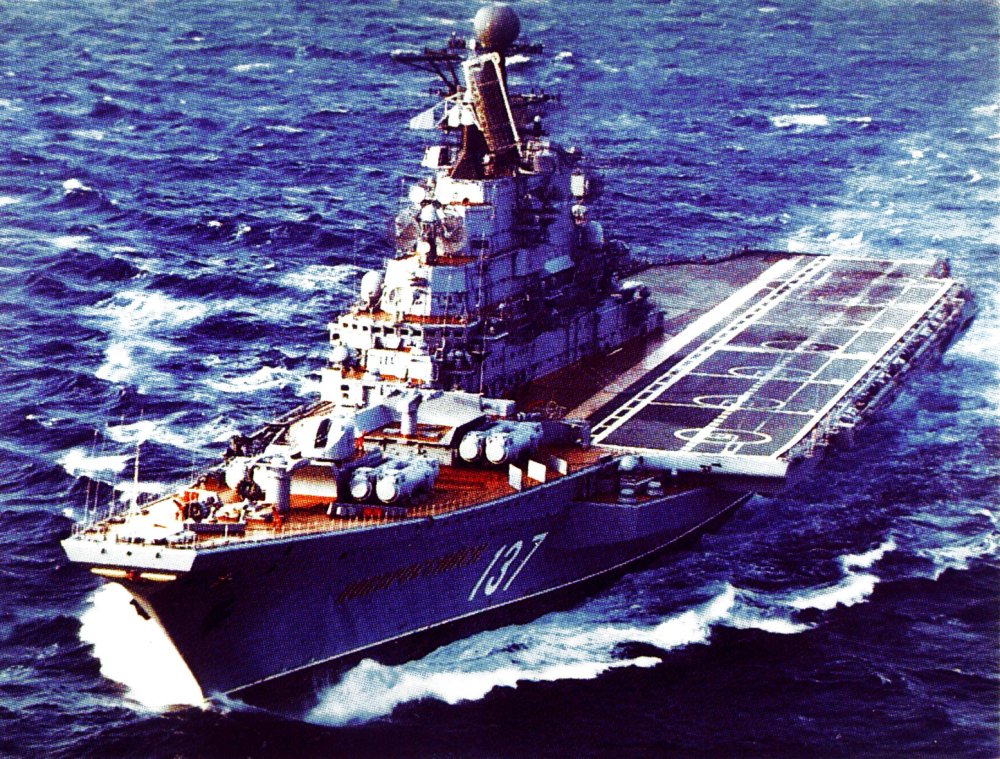 The dream of the battlecarrier did not die in World War II, despite the substandard performance of many of the converted ships, and despite the severe demands that jet aviation would put on modern flight decks.

Indeed, the possibilities offered by new technologies kept generating proposals for new battlecarrier configurations for nearly as long as the last battleships remained in service. Even after the retirement of the last battleship, the idea of combining surface warships characteristics with aviation capabilities continues to entice major navies.

After the war navies faced the same problem that they had suffered after World War I, a surplus of large battleship hulls. Especially in the U.S. Navy (USN), admirals were reluctant to give up these hulls, despite the evident obsolescence of the battleships.

In the U.S. and elsewhere, architects studied the idea of converting old battleships, or sometimes unfinished battleship hulls, into aircraft carriers. In France, engineers studied the possibility of converting the incomplete battleship Jean Bart and the battered, refloated Strasbourg into carriers.  The Soviet Navy gave considerable thought to finishing its incomplete battleships and battlecruisers as carriers. The Royal Navy even gave some thought to completing its Lion class battleships as hybrid aircraft carriers, with two 16” gun turrets forward and a flight deck aft. The Director of Naval Gunnery pointedly referred to the idea as an “abortion,” and the idea was not seriously pursued. French and Soviet engineers came to similar conclusions, as the conversions were cost-prohibitive and would have resulted in ships less effective than purpose-built carriers.

Most of the world’s modern battleships went into reserve shortly after the war, and were scrapped in the late 1950s and early 1960s. The hulls were large, but not ideal for carrier conversion, and in any case, purpose-built ships were cheaper and more effective. Only the four ships of the Iowa class survived into the 1980s on the strength of their sound design, an enduring need for fire support, and the immense resources of the United States Navy. Over the long history of the class, several proposals emerged for converting them into hybrid battlecarriers.  Most of these proposals involved replacing the aft turret with a flight deck that could operate helicopters, thus giving the warships intrinsic anti-submarine and reconnaissance capabilities. The Royal Navy had undertaken a similar effort with the cruisers HMS Tiger and HMS Blake to only middling success, but the Iowas were much larger and thus offered considerably more space.

Advances in technology made the prospect even more enticing.  As the promise of the Harrier VSTOL fighter became apparent, plans for conversion envisioned battleships that could carry their own fighter protection. One design involved installing ski-jumps and aviation facilities on the Iowas that would allow them to carry up to twenty Harriers. The ideas were abandoned for the traditional reasons; conversion would be extremely expensive and would result in substandard aviation facilities compared to flight decks on dedicated aviation warships. The Iowas returned to service, but with their main armaments intact, and no major

While the Americans were contemplating ways to modernize the Iowas, the Soviets went in a different direction. Instead of giving a battleship a flight deck, they decided to give an aircraft carrier the kinds of weapons normally associated with a surface combatant. Soviet naval doctrine did not envision carriers as the center of major strike groups, but rather as playing a primarily defensive role.   The result was the Kiev class, a group of four “heavy aircraft cruisers” that could operate helicopters and VSTOL aircraft while also carrying a heavy anti-surface, anti-air, and anti-submarine armament.  Most notably, all of the Kievs carried at least eight P-500 surface-to-surface missiles, designed to strike enemy carrier battle groups at a range of up to 300km. The Kievs also carried a plethora of anti-air and anti-submarine missiles.

While most conversion proposals looked like battleships with flight decks, the Kievs mostly looked like aircraft carriers with a forward deck covered by missile launchers. Their primary fighter was the Yak-38 Forger, of which they normally carried twelve, along with some sixteen helicopters. The four ships of the Kiev class were mostly successful in service, although the one surviving ship, INS Vikramaditya, underwent reconstruction upon sale to India in order to acquire a full, ski-jump flight deck.

Ironically, concurrent developments in naval technology would probably render the idea of a battlecarrier more workable today than in the past. The F-35B Panther VSTOL fighter has served to make short decked aircraft carriers considerably more lethal than even in the height of the Harrier era. The MV-22 Osprey has, similarly, substantially increased the flexibility of small carriers.  Unfortunately, there are no more battleships to convert. While the Navy had excellent reasons to dispose of the obsolete Iowas, the existence of the F-35B and the MV-22, along with the desire to disperse aviation resources across a wide set of platforms, may revive demand for large surface ships that can do a bit of everything.