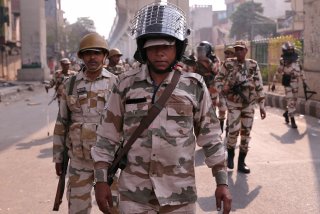 A large number of Indian soldiers will have to break out their winter garb and bundle up this summer as they're being deployed to the mountainous border region with China, as tensions between the two nuclear powers continue. It was a year ago that both sides massed units at the border in the Galwan Valley and eastern Ladakh near the poorly demarcated Line of Actual Control (LAC). In the months that followed India and China moved in tanks and constructed facilities for their respective forces to endure the long, cold winter.

Now the early summer temperatures in the region have risen and so too have tensions between New Delhi and Beijing. The two nations battled in the Himalayas in 1962, but in the decades that followed India's strategic focus has primarily been with its rival Pakistan.

However, after last year's brief—albeit deadly—encounter between Indian and Chinese soldiers, New Delhi has shifted that focus. According to reports from Indian media and Bloomberg, there are now some two hundred thousand Indian troops deployed along the border—an increase of more than forty percent from last year. As many as fifty thousand were deployed in just the past week, and where the past military presence along the border was aimed largely at blocking a Chinese invasion, this build-up could allow India the opportunity to attack and even seize territory should it take on an “offensive defense” strategy.

Senior government officials in New Delhi have said that the redeployment of troops in the region includes more helicopters, which would transport soldiers from the Kashmir Valley altitude zones, while also allowing for the quick repositioning of artillery pieces including the widely used M777 howitzers built by UK-based BAE Systems.

India has also been eyeing the Russian-made Sprut SDM1 light tanks, and could be Moscow's first export customer. The eighteen-tonne Sprut could prove ideal to operations in the mountainous region as it shares the same main gun as the T-90 main battle tanks that are in service with the Indian Army. The tank boasts thinner armor, but it can be airlifted or even deployed by parachute with the crew inside.

China has already deployed its similarly sized Type 15 light tank to the region, and last year had constructed special mobile barracks for soldiers to help them endure the harsh winters.

While tensions cooled as the temperatures in the region dropped, both sides have continued their respective build-up. It isn't known how many troops China may have on its side of the border, but it has been constructing additional runways and buildings to allow for the quick airlifting of men and material, while according to reports, China is also building bomb-proof bunkers to house fighters and has moved in long-range artillery, tanks and rocket regiments.

If a fight does come this year, then it will be far worse than the fist-fight and rock-throwing that occurred last year. As both sides continue to build up their forces one dangerous miscalculation could result in a very deadly conflict.