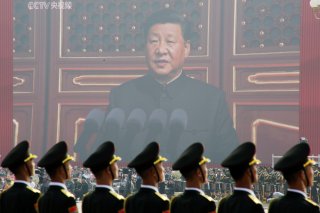 Five U.S. legislators made an unannounced one-day visit to Taiwan and met with Taiwanese President Tsai Ing-wen on Friday, reaffirming America’s support for the island’s self-governance amid increasing tensions between Taiwan and mainland China to the west.

The trip, marking the third congressional visit to Taiwan in 2021, was immediately and harshly criticized by Beijing, which argued that it was a violation of the “one China” principle. The United States officially (though ambiguously) recognizes and affirms this principle.

Echoing earlier remarks by President Xi Jinping, Zhao claimed that the unification of Taiwan with mainland China was an “unstoppable historical trend.”

The five legislators—Rep. Mark Takano (D-Calif.), Rep. Sara Jacobs (D-Calif.), Rep. Colin Allred (D-Texas), Rep. Elissa Slotkin (D-Mich.), and Rep. Nancy Mace (R-S.C.)—were unrepentant. “We are here in Taiwan this week to remind our partners and allies [...] that our commitment and shared responsibility for a free and secure Indo-Pacific region remain stronger than ever,” Takano said.

Other lawmakers used words that were more incendiary. “Just touched down in the Republic of Taiwan,” Mace tweeted on November 25. Her words indicated her support for Taiwan’s independence from China because the Taiwanese government’s official name is the “Republic of China,” the successor state to the government that ruled mainland China from 1912 to 1949.

The Republican congresswoman later told CNN that her use of the phrase was “100 percent” intentional.

The five legislators arrived on the island on Thursday night and held meetings with senior Taiwanese leaders, according to the American Institute in Taiwan, a U.S. government-run organization that functions as the de facto U.S. embassy in the country. The lawmakers later met with Tsai and committed to further cooperation “in order to uphold our shared values of freedom and democracy and . . . ensure peace and stability in the region,” according to a statement released by Tsai’s office.

Washington and Taipei have not held official diplomatic relations since 1979. Only a handful of nations still recognize Taiwan, and the Chinese government in Beijing has made conspicuous efforts to incentivize them to switch. This switch has sometimes been controversial; the Prime Minister of the Solomon Islands blamed his country’s recent unrest on the government’s 2019 decision to switch recognition from Taipei to Beijing.