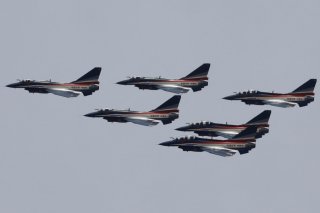 Taiwan’s Defense Ministry announced on Friday evening that China had sent thirty-eight fighter jets into Taiwan’s “Air Defense Identification Zone” (ADIZ) earlier in the day, the highest recorded number of such flights since the reporting system came online in 2020.

The Defense Ministry report revealed that the Chinese planes had entered the ADIZ in two waves. First, during the daytime, twenty-five planes had flown into the ADIZ from the southwest. Later that evening, another thirteen followed, from the same direction. While the first wave remained in the southwest, the second flew northeast before returning to China.

Although the flights came within the ADIZ area, they did not violate Taiwanese airspace at any time during the incursion, according to the Defense Ministry.  An ADIZ is legally identified as an area around a country’s airspace that, while not explicitly sovereign to the nation, requires immediate identification and connection with air traffic control. Taiwan’s actual airspace only extends twelve nautical miles off its coast, a distance that fighter planes can traverse in seconds.

Before Friday’s incursion, the single-day record for flights of the People’s Liberation Army Air Force (PLAAF) into the Taiwanese zone occurred in June, when twenty-eight planes entered.

Friday, October 1 was China’s National Day, commemorating the establishment of the People’s Republic of China on October 1, 1949. Experts highlighted the connection between the date and the incursion, as well as noting the increased role of bomber aircraft.

Experts have argued that the incursion flights have a twofold purpose—to demonstrate the capabilities of the PLAAF, as well as to provide Chinese intelligence with vital information about Taiwan’s response time to incursions.

Although China’s post-1949 government has never controlled Taiwan, it has long viewed the island as a rebellious province rather than an independent nation. Overseeing a groundswell of Chinese nationalism and improvements in the quality of the People’s Liberation Army, President Xi Jinping has pointedly avoided ruling out the use of military force to claim Taiwan if necessary.

However, China’s strategic calculation is complicated by the fact that Taiwan is a “major non-NATO ally” of the United States, which has come to regard the island’s advanced semiconductor manufacturing industry as vital to its national interests. Although Washington has never formally committed to defending the island against a Chinese invasion, the consensus view is that it would, and such a step is generally supported in the United States.