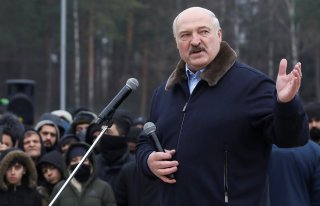 As the Belarusian border crisis, in which many Middle Eastern migrants have traveled to Belarus in hopes of crossing the border into Poland and entering the European Union, continues, anger has built over the Belarusian government’s failure to discourage migrants from attempting to illegally enter Poland.

Accusations that the Belarusian government was intentionally stoking the migration were validated on Friday when Belarusian President Alexander Lukashenko visited a warehouse that provided housing migrants and informed them that Belarusian border guards would not attempt to stop them if they traveled West.

“If you want to go westwards,” the Belarusian leader declared, “we won’t detain you, choke you, beat you. It’s up to you. Go through. Go.”

Lukashenko indicated that the migrants were free to return home to their native countries. But also, he indicated that his government would not try to coerce them into doing so. “We won’t in any circumstances . . . load you on planes to send you home if you don’t want that,” he said.

Lukashenko has accused the European Union of creating the border crisis, but European officials have instead blamed it on Belarus, arguing that the government in Minsk had freely given away Belarusian visas to Middle Eastern migrants, allowing them to enter the country and reasoning that they would attempt to travel overland into the more prosperous European Union rather than remain in Belarus.

In particular, Polish officials have claimed that the Belarusian government’s migrant policy is being conducted in retaliation to the EU nations’ sanctions on Lukashenko after his re-election in 2020 in a contest widely considered to be fraudulent. That contest led to a major protest movement that ended in mid-2021 after demonstrations were violently suppressed.

The border crisis has prompted the EU to introduce new sanctions against Minsk, which are slated to be approved and put into effect by early December.

Though Lukashenko indicated that Belarus would not force migrants to return home, some migrants have voluntarily chosen to do so, and Minsk has assisted with their exits. Last week, several hundred Iraqis were returned to their homes in the country’s northern Kurdistan region.

The government has also helped to house refugees in warehouses after roughly a dozen died in separate incidents while attempting to cross the border several weeks ago. The migrants’ deaths were attributed to the country’s harsh winter weather conditions.