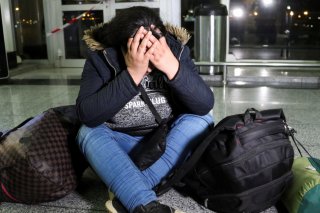 More than four hundred Iraqis who had traveled to Belarus after being falsely informed by the government of Alexander Lukashenko that they could enter the European Union are being returned to Iraq via charter flight from Minsk to Baghdad, according to officials from Iraq’s Ministry of Foreign Affairs.

Ahmed al-Shhaf, the ministry’s spokesman, indicated that four hundred and thirty Iraqis had “been documented to board the evacuation flight” returning them to Iraq. An additional fifty had also been registered in Belarus for later evacuation, according to al-Shhaf, although he told Al Jazeera that no further repatriation flights had been scheduled.

The deportation flight aims to lower the cost of the unfolding humanitarian crisis in Belarus, where thousands of impoverished immigrants, lured into the country by the fictitious promise of safe passage into Poland and the European Union, are being forced by the Belarusian state security forces to attempt to cross the border illegally. Most of the immigrants originate from countries in the Middle East, including Iraq, Syria, and Yemen, where military conflicts have continued.

The incident marks another point of contention between Belarus and the West, which has placed increasing sanctions on Minsk after a year-long wave of protests following Lukashenko’s victory in an election widely condemned as fraudulent. The claimed winner of that election, Sviatlana Tsikhanouskaya, has been forced into exile in neighboring Lithuania.

Sanctions increased after a May 2021 incident in which a Ryanair flight from Greece to Lithuania, passing over Belarus, was forced down by the Belarusian air force so that a pro-democracy activist onboard could be taken off and arrested. That incident, widely described as state-sanctioned air piracy, led the European Union to blacklist the Belarusian state-run airline, in addition to other sanctions.

The migrant crisis in Belarus has been widely characterized as Lukashenko’s retribution against the European Union for sanctions. Refugees attempting to enter Poland reported that Belarusian officials had given them instructions on how to cross the border, as well as axes and wire cutters to cut through obstacles.

After the refugee crisis began, Iraq, as well as other Middle Eastern countries including the United Arab Emirates (UAE) and Turkey, curtailed flights to Minsk in an attempt to stem migration. However, Belarus has continued to issue large numbers of visas to prospective migrants, opening up other ways to enter the country.

At least eleven migrants have died so far while attempting to cross the border.