How Belarus Is Weaponizing Migration in Europe 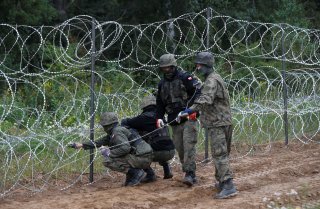 The European Union is still reeling from the 2015 refugee crisis. Now, it is facing a renewed attempt to weaponize refugee and migrant flows. While the most recent flare-up is being orchestrated by Belarus, it represents merely part of the European border crisis being manipulated by outside powers.

For several months, the number of fully booked passenger flights from Baghdad to Minsk has steadily increased. Iraqi and Belarusian travel agencies and airlines have been happy to meet the rising demand, but the development is hardly natural. In response to the EU’s implementation of further sanctions against Belarus for its political suppression over the last few months, Belarusian president Aleksandr Lukashenko stated back in May his intention to flood the EU with “migrants and drugs.”

Thousands of refugees and migrants have since entered the EU from Belarus, despite the best efforts of national immigration authorities and Frontex, the EU’s border agency, to curtail the flow. Lukashenko’s ploy is just the latest example of using refugees as a political weapon against the EU, exploiting the bloc’s pledged commitment to refugee rights.

Most of the recent arrivals via Belarus have come from Iraq, with the rest largely from the Middle East and Africa. After arriving in Belarus, they are encouraged to enter the EU’s visa-free Schengen Zone through Belarus’s borders with Poland, Latvia, and Lithuania.

Refugees to Europe are almost always bound for the wealthier, western EU states. But the majority come through the poorer southern and eastern EU countries first, where there is less infrastructure and public will to support them. They often arrive with few resources, limited language skills, and rely on government assistance to survive.

Brussels has butted heads with certain EU member states over refugee intake before. Refugee quotas were resisted by the Visegrad countries following the 2015 refugee crisis, leading to ongoing disputes between them and the rest of the EU. And while some of the recent refugees and migrants have been allowed into Poland, Latvia, and Lithuania, these countries will likely be unwilling to grant them permanent asylum.

EU and national European leaders have been keen to downplay the threat of weak border security. EU states are expected to release a statement this week showing their determination to prevent uncontrolled migration from Afghanistan.

But with increasingly diverse ways to get refugees into Europe (and the determination of other countries to see it happen), it seems inevitable that the EU’s border security will continue to be threatened.

Lithuanian border authorities have so far detained 4,100 refugees entering Lithuania from Belarus this year, compared to 81 last year, 46 in 2019, and 104 in 2018. The increase prompted the Lithuanian government to declare a state of emergency in July, and Poland’s government has formally asked Polish president Andrzej Duda to declare a state of emergency too.

Last Wednesday, EU states accused Belarus of conducting a direct attack against them, hitting back at what they have stated are “hybrid warfare” attempts to punish them. Also, last week the European Court of Human Rights also ordered Poland and Latvia to provide the refugees and migrants on their border with food, water, clothing, medical care, and temporary shelter.

The ongoing affair has naturally led to rising political opportunism and social tension. Poland’s ruling Law and Justice party, for example, has used the crisis to argue the need for its strict law and order and migration policies, as its stagnating popularity and questionable control of parliament have raised the possibility of a snap election.

Dozens of migrants, believed to be from Afghanistan, have been stuck at the Polish-Belarusian border for weeks, leading to clashes between Polish border police and refugee rights activists over the weekend. There were also reports of riots at a refugee center in Palbrade, Lithuania, in June.

Lukashenka clearly has reason to believe his ability to cause social and political unrest will add to his leverage over the EU. Turkey has likewise consistently used its position as a transit country to extract political and financial concessions from the EU. Before his downfall in 2011, Libyan president Muammar el-Qaddafi used migrant flows for similar reasons.

And although the recent focus has been on Belarus, several factors suggest the guiding hand of the Kremlin. Lithuania’s deputy foreign minister, Mantas Adomenas, stated recently that some of the migrants attempting to cross its border with Belarus were Russian nationals. Renatas Pozela, commander of the Lithuanian border guards, indicated in 2017 that the FSB Russian intelligence agency plays a key role in moving migrants from Russia and Belarus into Lithuania.

Facilitating migration into the Schengen Area is part of Moscow’s wider plan to cause social unrest in Europe and has occurred across Russia’s large borders. Through Russia’s far north city of Kirkenes, the FSB helped smuggle hundreds of migrants a week to Norway during the 2015 migrant crisis. The Finnish government also accused Russian-backed criminal groups in 2015 of smuggling refugees and migrants into the country.

Exploiting the EU’s weak border systems allows the Kremlin to export Russian-backed criminal networks to Europe, creating a unique challenge to continental law enforcement and judicial systems. And according to Polish, U.S. and UK intelligence, Russia’s SVR intelligence agency placed numerous “illegals” among the wave of refugees entering Europe during the 2015 migrant crisis. It is now known that several ISIS terrorists were part of the 2015 migrant wave, further representation of the diverse security threats associated with the Schengen Area.

Europe’s current crisis has shown how vulnerable the continent remains to political destabilization and social unrest on the issue of refugees—even by a small country like Belarus. This problem will only be exacerbated by the potential flood of new refugees from Afghanistan. If EU member states take further steps to reduce the freedom of movement enjoyed in the Schengen Area, it will steadily erode one of the pillars of the EU itself.