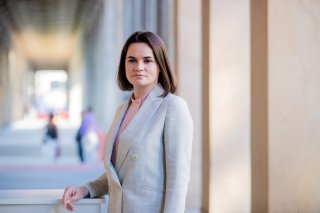 During her recent visit, Belarusian democratic leader Sviatlana Tsihanouskaya put the struggling European nation of 9.4 million back on Washington’s notoriously fickle radar. I had a first-hand seat as she wowed DC. Elegantly dressed, she was always on message. She was caught off guard only once, when the editor of this magazine, Jacob Heilbrunn, asked her what was the biggest surprise in Washington. The former English teacher started to laugh. Pitch perfect response.

In private dinners, she spoke movingly without notes, firing up hardened elites without a fig of interest in the country.

We shouldn’t have been surprised. She’d already done the same thing in Belarus last August after Alexander Lukashenko tried to purloin his sixth presidential election.

When I interviewed Tsihanouskaya twice last fall for this magazine, she was not presidential material. Her answers to basic questions were simplistic. She was visibly uncomfortable. No longer.

Tsihanouskaya doesn’t shy away from questions and she relishes public speaking. The thirty-eight-year-old graduate of Mozyr State Pedagogical University—a school that trains teachers—is a quick study.

At Stanford University on July 29, when some of the best minds in the world grilled her, she schooled them. When they pressed her to game out the future geopolitical orientation of Belarus, she cut through the academic fog and focused on the big picture.

“Our task right now is not to debate how or with whom Belarus will align in the future. Our task is to give our people back their ability to choose. Once we have our choices back, we will be able to decide where the road forward for Belarus will go,” she said.

Perhaps the most surprising aspect of Tsihanouskaya is how she channels her own difficult situation into action. Tsihanouskaya’s husband Siarhej has been behind bars since May 2020, and she hardly sees her two children. At a rally in Washington, Tsihanouskaya tenderly greeted the children at the rally and made a special point to warmly greet a child in a wheelchair. Tsihanouskaya’s eleven-year-old son is deaf and it’s the reason why she stayed at home for many years. Tsihanouskaya worked tirelessly to ensure that he had the right hearing aids and educational resources. What’s interesting is that Tsihanouskaya doesn’t mention this at all. She’s doesn’t boast or lean hard on family tropes.

When we hosted the opposition leader at the Atlantic Council, PBS Chief Correspondent Amna Nawaz asked Tsihanouskaya how she deals with the stress of the situation.

In a classic Tsihanouskaya move, she gently said that it’s not about me. Let’s focus on the people of Belarus who are really suffering.

And suffering they are. Accusations of police brutality and even rape in prison are all too common. The country currently has 597 political prisoners, and about ten more are being put behind bars every day. In the last two weeks, there has been a harsh crackdown on what remains of the tiny but mighty independent press in Belarus and on civil society. Lukashenko’s game plan is obvious: while he cracks down on independent press and civil organizations, he’s waiting out Tsihanouskaya, who lives in exile in Lithuania. Which side will run out of money first?

Washington recently opened its purse, pledging $30 million in support to Belarus, a huge leap forward. However, it’s likely that the money will be tied up in bureaucratic knots and go to bloated American contracting firms in Bethesda rather than the actual Belarusian organizations that need the funds now. Too many Washington bureaucrats keep repeating the line that we must slavishly follow the rules, which take forever and are wasteful, ignoring the glaring fact that openings like this one only occur infrequently. There are more efficient ways to move support if only Washington could muster a little creativity.

Terror tactics aren’t Lukashenko’s only move. More than 2,400 migrants, mostly from Iraq and Africa, have been flooding Lithuania’s border via Belarus as payment for Vilnius’ outspoken leadership and swift condemnation of Lukashenko. Lukashenko said that “he will no longer stop” the migrants, and Vilnius claims that Belarus is encouraging migrants to fly to Minsk, and then Belarusian border guards are helping migrants cross the Belarus-Lithuania border to create an artificial migration crisis. Tsihanouskaya and her team live in Vilnius and enjoy the protection of Lithuania’s secret service.

Tsihanouskaya’s days begin early. She’s up at 4 am working and drafting speeches and preparing for the next day until the wee hours.

Perhaps the most perplexing thing about Tsihanouskaya is her future plans. In multiple interviews, she said she won’t run for president again. However, she leaves open the possibility of a public role.

Tsihanouskaya isn’t very charismatic and she’s certainly not the most talented politician in Belarus—they’re all in jail—but she is clearly right for the moment.