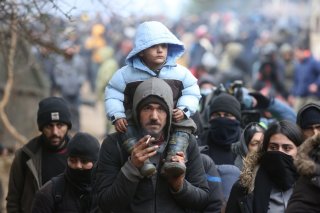 Europe may have thought that with the Nord Stream II pipeline near completion and the resolution of the Moldovan gas crisis that its energy problems were over. Not a chance. Belarusian dictator Alyaksandr Lukashenka’s recent threats to shut down the Yamal-Europe pipeline suggest they are only beginning. Already, thousands of migrants are shivering in the frigid forests on the Polish border, and if Europe can’t manage these twin crises, Europeans, too, may be feeling the cold.

The Yamal-Europe pipeline transits gas through Belarus to Poland and Germany, which makes it a prime lever for Lukashenka to extract concessions from the European Union. Brussels has just announced another round of sanctions against Belarus in response to its orchestration of the migrant crisis on the Polish-Belarusian border.

Since June, Belarusian security personnel have steered thousands of migrants away from the border checkpoint where they can legally claim asylum and towards the now fortified border where they are being met by a force of seventeen thousand Polish border police. Two thousand migrants are now trapped in a freezing purgatory between two armed police forces, unable to enter Poland and unable to return to Belarus. In response to what Poland perceives as a “hybrid warfare attack,” it has threatened to shut down the border altogether. In turn, Lukashenka says he will pull the plug on the gas supply.

"We are heating Europe, they are still threatening us that they will close the border. And if we shut off natural gas there? Therefore, I would recommend that the Polish leadership, Lithuanians and other headless people think before speaking," Lukashenkа said.

Lukashenka’s particular ire for neighboring countries Poland and Lithuania stems from the contested Belarusian election of August 2020 which resulted in him beginning his sixth term, despite widespread claims that his victory was falsified. The election resulted in a year-long protest movement which was met by a brutal police crackdown, prompting much of the Belarusian opposition, including its leader Sviatlana Tsikhanouskya to seek refuge in Poland and Lithuania. Now, as the crisis deepens, neighboring Latvia is also mobilizing to secure its border.

Lukashenka’s decision to flood its neighbors with migrants and possibly cut off their gas supply serves two purposes. One is purely punitive, a means to exact revenge for harboring Belarusian activists and the imposing of EU sanctions. The other is more coercive. Russian foreign minister Sergey Lavrov suggested that the EU stem the influx of migrants by paying Belarus to take them, as it pays Turkey to stem the influx of refugees from Syria. Such payments would run counter to existing EU sanctions on Belarus and help fund a government that is currently indebted to Russia to the tune of $8 billion.

The EU is not likely to consider such payments. The flow of migrants is not organic but rather engineered by Lukashenka’s regime specifically to blackmail the EU. Migrants report being lured to Belarus from Iraq and Syria with promises of easy transit to Poland by Belarusian travel agencies tied to the Lukashenka regime. The migrants, who are charged €15,000-20,000 for the experience, report being marched to the border where they are pressed by Belarusian security forces to breach the heavily reinforced border.

Tensions involving migrants on the Polish-Belarusian border are not new. A wave of Tajik and Chechen refugees attempting to flee Russia and Central Asia via Polish-Belarusian border crossings prompted Warsaw in 2016 to begin systematically denying asylum claims to Muslim refugees. In 2017 then-Polish Minister of the Interior Mariusz Blaszczak openly stated that Poland perceives Muslim immigrants as a threat, asserting that asylum seekers from Chechnya and Central Asia would be treated as economic migrants with false intentions, rather than refugees fleeing political repression. By channeling Muslim refugees to the Polish border, Lukashenka may be attempting to exacerbate tensions between Poland and the EU and attempting to highlight contradictions between Poland’s hostility to immigration and the EU’s professed commitment to human rights.

Poland has demanded that the EU take “concrete steps” to aid it in the conflict, requesting the EU co-fund its planned border wall. It has also dangled the possibility of invoking Article 4 of NATO, which would trigger consultations with other NATO allies to discuss threats to Polish, Lithuanian, and Latvian security. Neither of these is particularly appealing for the EU. However, it has largely taken Poland’s side, condemning Belarus’s actions and enacting sanctions.

The sanctions announced by the EU today primarily target the airlines and travel agencies bringing migrants into Belarus, as well as thirty Belarusian officials tied to the Lukashenka regime. Several Middle Eastern countries have suspended flights to Belarus. Iraq has already begun the process of repatriating its citizens from Minsk.

For his part, Lukashenka has called the accusation that Belarus has engineered this imbroglio “absurd.” He’s threatening retaliation for new sanctions. Cutting the gas supply is a likely option. When asked about the possibility on Russia’s state-owned Channel One news, Russian president Vladimir Putin replied that Lukashenka hadn’t mentioned the notion to him, but that he was certainly capable of carrying it out.

Lillian Posner is the assistant managing editor at the National Interest.