The Pivot West Problem: Why Belarus Needs A Balanced Relationship with Russia 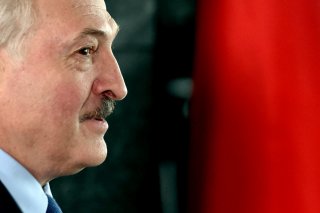 The coronavirus has taken many forms and mutations, but perhaps the worst is its use as a method of torture. Critics of Belarussian president Alexander Lukashenko are reportedly told upon their detention that they will not leave prison without having been infected. The simple act of waving a red and white Belarussian flag is enough to merit a fifteen-day sentence in a deliberately overcrowded cell with no ventilation. Guards periodically relocate the coronavirus-positive to infect the maximum number of prisoners, many of whom are in their seventies. In a last-ditch effort to cling to power, Lukashenko has weaponized the coronavirus. He is using it to punish prisoners on top of the beatings, rapes, and family separations.

Russia has sent both financial aid and manpower to help Lukashenko suppress demonstrations, even going so far as to set up pro-Russian media and shutting down the internet. Now, America is trying to intervene. Sandwiched between the economic stimulus, coronavirus relief, and pork-barrel spending that makes up the recently passed U.S. federal budget was something called the Belarus Democracy Act. This was signed into law by President Donald Trump. It contains sanctions mechanisms as well as measures to support Belarussian language education and counter internet censorship and surveillance. “What we’re seeing in Belarus is unprecedented, but the U.S. leadership in supporting the aspirations of the Belarusian people has been largely missing, limited mostly to boilerplate statements and meetings with the opposition leader Sviatlana Tsikhanouskaya at the level below Secretary of State,” says Sofya Orlosky, Freedom House’s Senior Program Officer for Eurasia.

Whether Joe Biden will do much about it when he is president is an open question.

If he is serious about reviving America’s commitment to democracy promotion, then Biden should consider supporting the Organization for Security and Co-operation in Europe (OSCE) in facilitating negotiations between the Sviatlana Tsikhanouskaya and the Lukashenko regime with the goal of holding new, transparent elections. Although the Belarus Democracy Act does enact new sanctions, the U.S. trails behind Europe when it comes to tightening the screws on Belarus’s human-rights abusers. Biden has many avenues to strengthen these measures and bring the United States more in line with Europe, should he choose to take advantage of them.

It is possible that Biden will draw on his experience in Ukraine. After the Orange Revolution in 2014, since he served as the Obama administration’s point person in Kyiv, working alongside the newly formed Poroshenko government to root out corruption and strengthen democratic institutions. This could provide a roadmap for working with Lukashenko’s successor. But Biden must keep in mind that he will not be dealing with a color revolution. Belarus is not Ukraine-lite, but a country with a unique history and a unique relationship with Russia.

As for Moscow, it is growing increasingly dissatisfied with Lukashenko’s performance. Ideally, Lukashenko would hold new elections in which he would lose to a candidate credibly elected by a Belarussian majority. There is reason to believe that the outcome of those elections would appease all parties, including Russia, who could easily end up with a Belarussian president willing to play ball with the Kremlin. But a constitutional rewrite could jeopardize this outcome.

Tsikhanouskaya and her cohort proclaim that theirs is not an anti-Russian movement. They frame the protests in Belarus as a fundamentally domestic issue rather than a geopolitical realignment. The goal of the movement, they say, is simply to unseat Lukashenko and replace him in free and fair elections. While Tsikhanouskaya has professed repeatedly that she’s not planning to run herself in an electoral do-over, her vision for Belarus is one that maintains constructive relations with Russia and with Belarus’s European neighbors.

There is some precedent for this. Although Russian president Vladimir Putin took his time congratulating Biden on his electoral win, he was quick to welcome Maia Sandu, Moldova’s newly elected president. Sandu defeated several pro-Russia candidates, marketing herself as someone who was neither anti-Russian or pro-Russian but a defender of Moldova’s interests. Lukashenko has on many occasions pivoted to the West to demonstrate to Russia that Belarus has other options.

Any long-term solution for Belarus will require striking this type of equilibrium, no matter how tenuous it may be, just by the nature of European geography. But Russia cannot afford to lose face by allowing the grassroots push for democracy in Belarus to appear successful. The domestic ramifications would be daunting for the Kremlin, which faces protests in Khabarovsk that have been ongoing since July.

Lillian Posner is a program assistant for Russia, the Middle East, and Asia Pacific at the Center for the National Interest. Twitter @LillianPosner.