What Ukraine Can Expect from Joe Biden 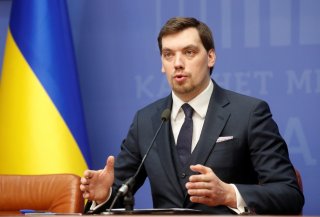 After being dramatically forced out as prime minister of Ukraine after having served for fewer than six months, one could forgive Oleksiy Honcharuk if he wanted to simply wash his hands of Ukraine’s sometimes maddening politics and be done with it all.

Honcharuk’s tenure as prime minister was cut short almost as rapidly as it began. When Volodymyr Zelenskyy went from playing a satirical president on television to become Ukraine’s real-life president in 2019, the populist comedian rode a tidal wave of public outrage and promised to finally reform the country and root out deeply embedded corruption. Honcharuk, then a thirty-five-year-old with a workaholic reputation, was tasked with being the guy to make these promises a reality. In August 2019, Zelenskyy recommended that Ukraine’s parliament, the Verkhovna Rada, appoint Honcharuk as prime minister of Ukraine—the youngest in the country’s history.

By February of 2020, Honcharuk knew his days were numbered. Honcharuk, who, among other things, is a fellow at the Atlantic Council, now describes his last conversation with the president—who, at the time, had just survived being dragged into the political firestorm of American President Donald Trump’s impeachment—as a key moment.

“[Zelenskyy] told me that, ‘Ok, we have some problems. Nobody likes the government’s policies,’” says Honcharuk. “Around him it was lots of voices saying that it’s very bad, and the [International Monetary Fund] is trying to rule the country. All these fairy tales and fakes about ‘external governments.’”

Honcharuk says Zelenskyy still hears plenty of these “fairy tales” from those around him.

Zelenskyy pushed Honcharuk out in March, along with many cabinet officials seen by observers as honest, reliable reformers, and replaced many of them with individuals loyal to Zelenskyy and his inner circle.

It was a grim spring in Kyiv. Zelenskyy’s promises had many in Ukraine and the West dreaming that change was finally possible. Now, the dreamers found themselves waking up, as reformers and anti-corruption activists faced more harassment by investigators and were targeted with arson attacks.

So, you could forgive Honcharuk if he wanted a break after a difficult end to his six months as prime minister.

Instead, Honcharuk is spending almost six months touring around the United States, meeting with businesses in Silicon Valley, appearing on think tank panels and podcasts, and meeting with U.S. government officials in an effort to improve Ukraine’s image abroad and shape how the world sees and works with Ukraine. He doesn’t want to get into specifics of who exactly he’s met with, but says with a tight, knowing smile, “I think you will see some results of these activities in January.” He’s not done with politics and feels no need to hide it.

“I’m a citizen of Ukraine and it’s enough to be here and try to help my country,” says Honcharuk. “I worked on [these issues] before I became prime minister, before I became part of President Zelenskyy’s team, and I will continue my efforts and work in any position I will have. I don’t want to hide anything.”

Honcharuk came to the United States at one of the most historic moments in the country’s history. With the disastrous national response to the coronavirus pandemic leaving more than 300,000 Americans dead and a presidential election that has left the country in political turmoil, it may seem like a strange time for a self-appointed emissary to be trying to highlight the importance of the U.S.-Ukraine relationship for American policymakers. But for Honcharuk, President-elect Joe Biden’s victory may represent Ukraine’s best chance of getting back on the path to progress and leaving Kyiv’s own political turmoil behind.

“Biden, he’s a very kind and very strong person,” said Honcharuk. “He’s very experienced, one of the most experienced politicians in the world, actually.”

Biden ran his presidential campaign on the message that he could awaken American’s better angels and restore a sense of normality. Honcharuk thinks it’s entirely possible that Biden could do the same thing for Zelenskyy.

Though Zelenskyy has repeatedly committed to fighting corruption and rooting out Ukraine’s oligarchs, “now we see the influence of oligarchs and corruption not only still exist, but some oligarchs became more powerful,” says Honcharuk. “The president, he already failed. To fix something, to change something, he must change the approach.”

In fact, Biden’s knowledge of Ukraine and experience with U.S. policy toward it are at the front of Honcharuk’s mind. He has printed out remarks from then-Vice President Biden given during a 2015 visit to Ukraine, where Biden spoke on the country’s history of revolution and change.

Honcharuk grabs his printout and reads aloud a section where Biden refers to the 2004 Orange Revolution, saying, “Ukraine’s leaders proved incapable of delivering on the promise of democratic revolution. We saw reforms put in place only to be rolled back. And the bright flame of hope for a new Ukraine snuffed out by the pervasive poison of cronyism, corruption, and kleptocracy.”

“I think all these words are still relevant,” says Honcharuk.

As the Obama administration’s point-man for Ukraine, Biden was in charge of working with Ukraine’s new post-revolutionary government to push out corrupt figures like then-Prosecutor General Viktor Shokin, even threatening to take a hard line with Ukraine if it didn’t muster the courage to take action against those holding it back. Honcharuk thinks this is exactly the kind of tough-love partnership that Ukraine needs from the United States now.

“During one of his visits to Ukraine,” says Honcharuk, “Biden says ‘Ok guys, help us to help you.’” Honcharuk says the United States needs to be frank with Ukraine and make clear that there are real consequences if Ukraine doesn’t commit to finally combating oligarchs and systemic corruption.

In Honcharuk’s mind, this is what Biden’s red line should be. “If you work with oligarchs, we will not work with you.”

The stakes of combating the influence of corrupt oligarchs and, by extension, the Kremlin forces using some of Ukraine’s oligarchs and politicians to exert influence on Kyiv, go beyond the fight against corruption. Ukraine is the frontline of the battle to prove that democracy and self-determination, as concepts, have a place in today’s world.

“The Kremlin is trying to use Ukraine as a showcase, creating all these ‘fakes’ about a ‘failed state,’” says Honcharuk. “It’s critical for them to show that Ukraine is a failed state, and that’s why [Ukraine] and other countries shouldn’t use democracy as a model,” and should instead subordinate themselves to Russia’s sphere of influence.

This gets to the heart of why Honcharuk and many of Ukraine’s reformers think the United States should be firmly committed to Ukraine’s success. The twentieth century was shaped by conflict over democratic governance, and the United States has, time after time, found that its closest friends hold similar values.

Ukrainians have professed to have the same values. They fought a revolution in 2004 to decide their own fate and now have doubled down with the 2014 Revolution of Dignity—and the world is still watching to see if they succeed in building a country of their own making. If Ukraine fails, it just might be a deathblow to the idea that a nation can build a modern democracy.

Honcharuk sees real progress in Ukraine since its revolution in 2014, particularly in the increase in pluralism in government. “Frankly speaking, after the Revolution of Dignity, we [didn’t have] a very broad number of politicians,” he says. “Almost all were connected to the oligarchs. We didn’t have a real choice. Now we have it.”

He says that a “new generation” of young, Western-leaning, reform-minded Ukrainians is coming into its own. Even though Zelenskyy hasn’t lived up to his loftiest promises, Honcharuk says that Ukrainians “supported not just a person, they supported the ideas” of a fight to build a government with integrity, guided by voters instead of robber barons. Even with the loss of momentum after Zelenskyy fired many of the independent reformists in his government, Ukrainians’ expectations have shifted—the fight for progress in Ukraine isn’t going away.

Honcharuk isn’t going away, either. He’s lost an official position in the Ukrainian government for the time being but says it doesn’t matter what his job title is. Listening to him speak, it’s clear he’s fundamentally committed to building institutions in Ukraine that can outlast any one leader. He’s itching to chase out Ukraine’s oligarchs and fight Russian propaganda, and finally end the Kremlin’s war against Ukraine.

These are the battles he sees waiting ahead in his future, and it’s what he’s getting ready for now. “To be successful with reforms, you should have a very strong team and infrastructure,” he says. Honcharuk also does not rule out running for office in Ukraine, “It could be part of it, but it’s not necessary. If it will be needed to succeed in my goals, of course, yes.”