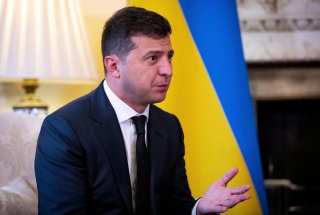 Ukraine has been backsliding in a big way for months. And it just got a lot worse. The country of forty million is teetering on the edge of a major constitutional crisis that could kill Ukraine’s reform project and destroy its standing as a troubled but hopeful country deserving of Western attention and support. And it may well do in President Volodymyr Zelensky, whose support has ebbed at home and abroad.

On Oct. 27, the Constitutional Court of Ukraine gutted the mandate of the National Agency for the Prevention of Corruption, one of the country’s anti-corruption institutions established after the 2014 Euromaidan Revolution. The idea behind the agency was simple: officials should declare their official income and assets online annually for cops, citizens, and watchdogs to scrutinize. Now, no one has to declare anything. Corrupt officials will be delighted. With no declarations, they no longer face criminal charges if there’s a discrepancy between their official income and lifestyle. For the chosen few, the good old days have returned.

This bone-headed decision is an arrow aimed at the heart of the nearly moribund reform project in the country. Ukraine never fixed its corruption problem, but this decision jeopardizes the country’s visa-free status with the European Union and $5 billion in international aid from the World Bank, International Monetary Fund, and the European Union. The decision could also make the country subject to $13.3 billion in early repayment requirements. Ukraine cannot afford these unnecessary shenanigans. The country remains Europe’s poorest.

Ukrainians aren’t happy with the court’s decision either. Protesters held signs in front of the Constitutional Court of Ukraine after the decision was made.

The court decision has tied up Ukraine’s parliament as well.

Zelensky’s attempts to fix the problem have been ineffectual. He derided the Constitutional Court as a “kangaroo court,” blamed pro-Russian forces, and proposed a bill to remove the judges. Critics lambasted the quick-fix plan, calling it unconstitutional. The Venice Commission agreed, warning that the president’s plan blatantly breaches the constitution and violates the separation of powers principle. The bill went nowhere.

Speaker of Parliament Dmytro Razumkov has proposed an alternative bill that would reinstate asset declarations. Reform lawmakers in Kyiv say that Razumkov is playing a constructive role in trying to find a solution, but anti-graft watchdogs charge that the new bill won’t fix the problem because it lacks teeth in the form of criminal liability for violations and will be overturned by the court again. They may be right, but the bill would lower temperatures and avoid the nuclear option of destroying the Constitutional Court.

Prospects looked bright for Razumkov’s bill, which cleared the Rada’s anti-corruption committee, until a legislator close to oligarch Ihor Kolomoisky sabotaged the process by proposing a last-minute alternative bill. The rules of procedure dictate that the alternate must be considered, meaning that Razumkov’s bill now cannot be voted on until Nov. 16.

Ukraine’s constitutional crisis comes on top of a political crisis. Zelensky’s Servant of the People Party technically enjoys a parliamentary majority (246 seats in the 450-seat Rada), but only 190–200 delegates reliably vote with the party. On Oct. 25, Servant of the People got trounced in local elections. The bloom is off the rose, and Zelensky’s power looks increasingly thin.

Lawyers will likely devise a way out of Ukraine’s current crisis, but the real solution is both obvious and painful, which is why Zelensky and his predecessor Petro Poroshenko both abhorred and avoided it. The country must embrace radical and thoroughgoing judicial reform and finally clean up its law enforcement bodies, especially the unreformed State Security Service of Ukraine (SBU). Zelensky’s current “reform” bill on overhauling the SBU is inadequate.

German Ambassador to Ukraine Anka Feldhusen, not a Ukraine novice, got it right in a recent interview. She said that German investors think the main problem in Ukraine is the judiciary and pressure from law enforcement agencies, not corruption.

Tackling corruption remains a necessary, if insufficient, step in the overall process of reform. Anti-corruption efforts were among the most positive results of Ukraine’s 2014 revolution. The setbacks on this front are a stark warning that progress isn’t permanent and can be lost with depressing ease.