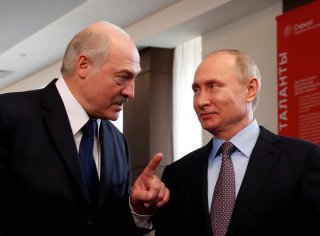 There is no reason to believe that the Belarusian opposition will come to power any time soon. Instead, there are numerous differences between what is occurring in Belarus and what occurred in Ukraine in 2014 and in Armenia in 2018. Here are four reasons why.

First, President Alexander Lukashenko is a very sturdy and strong-willed person, ready to hold on to his power to the end. In contrast to other post-Soviet leaders, he was the only one who had the presence of mind to preserve the entire Belarusian production sector. All neighboring countries—Estonia, Latvia, Lithuania—had their production sectors eliminated. The result is that a significant part of their populations, especially young people, are looking for jobs in Western Europe. It is also the case that Lukashenko is fighting not only for his own power, but also understands quite well that if the street mob comes to power, it would constitute the end of Belarus. He was the only one who, using Russian billions, was able to save factories, jobs, and the overall welfare of the people.

Second, he managed to retain the loyalty of almost all of his political team and security officials. The revolutions in Georgia, Ukraine, and Armenia were successful due to a grave division within elite groups. Once these divisions became apparent, the security forces announced that they would not defend the current authorities with repressive actions. Lukashenko is not in this position.

Third, Russia, with a slight delay, spoke out in defense of Lukashenko. Both Russian president Vladimir Putin and Foreign Minister Sergei Lavrov acknowledged that the elections were probably not perfect and possibly included some violations, but their message was clear: Lukashenko's victory is beyond doubt, and therefore Moscow considers him to be the legitimate president, period

Fourth, despite the fact that the opposition is assembling tens, even hundreds of thousands to the streets against Lukashenko, it cannot come to power, because unlike Georgia, Ukraine, and Armenia, it is institutionally absent in Belarusian politics—it doesn’t have serious political leaders, political parties that are represented in the Parliament, and doesn’t have established civil society institutions.

What does Belarus expect in the coming days and weeks? I think that Russian influence will be decisive for solving the political crisis in Belarus. The meeting between Lukashenko and Putin in September will bring some clarity to how the events in Minsk will develop—not the U.S. and Europe. Nor would American support for the EU foreign ministers to "mediate a transition" be effective, as John Herbst, the director of the Eurasia Center at the Atlantic Council and a former U.S. ambassador to Ukraine, has suggested. Quite the contrary.

Most likely, at a meeting with Putin, Lukashenko will draw a roadmap with stages—the adoption of a new constitution and early elections. The process will likely take about two years. This should have a calming effect on the Belarusian protesters. Then Lukashenko will assume, in my opinion, a position created specifically for him in the unified union state. During these two years, Russia will prepare a worthy leader who can finally realize Lukashenko's goals avowed twenty-six years ago.

Given such developments, Russia will not feel compelled to send troops to Belarus. As with Armenia, there is no geopolitical aspect to the street protests of the opposition in Belarus. Unlike Georgia and Ukraine, Belarusians are not choosing between Russia and the West. There are, of course, small groups of people in the West of Belarus who would like to play this card, but, in fact, they represent a negligible minority. Could there be sanctions against Russia due to the settlement of the Belarusian crisis and even deeper integration between Russia and Belarus?

The blunt fact is that Russia no longer fears any sanctions from the West. It has had more than enough of those. Today the West has no unity. The United States is in deep crisis internally and in the foreign policy arena because of President Donald Trump’s attempts to change the foreign policy paradigm of the United States. Even the threat of sanctions against Nord Stream 2 has no chance of being implemented, not to mention several other proposals from Ambassador Herbst outlined in his article in The National Interest.

As recent mass demonstrations in Berlin have shown, not Angela Merkel or Trump, but Putin is the true idol for many Germans, and the demands for true independence and sovereignty of Germany from the United States instead of its semi-colonial status will not give Chancellor Merkel the opportunity, even if she wanted, to succumb to blackmail and threats from Washington. Hence, what you lose on the swings, you gain on the roundabouts, as the British saying has it. Ahead lies the prospect of both the implementation of Russian economic projects and the deeper integration of Russia and Belarus into a single state, whether the West likes it or not.