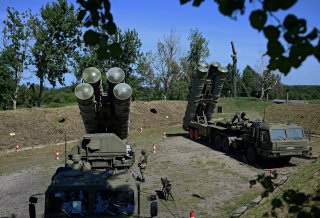 Belarusian president Alexander Lukashenko remains a committed ally of Russian president Vladimir Putin. But Lukashenko also understands that any war with NATO would mean his country could quickly face attacks from enemy aircraft.

"The military hardware turned out to be insufficient for us,” Lukashenko said in video footage released by the Pool of the Top Official Telegram channel close to the presidential press office, Russian state news agency TASS reported. “We will have sufficient personnel but hardware [will not be enough]. I turned to [Russian President Vladimir] Putin so that in addition to the S-400 systems located in the Gomel Region, additional S-400s could be supplied to the area slightly west of Minsk.”

Permanent Presence of the S-400?

The Russian military previously deployed two S-400 "Triumf" missile systems to Belarus for use in joint Russian-Belarusian Union Resolve combat training exercises. Those missile systems remained in Belarus after the exercise as Russia launched its invasion of Ukraine.

Lukashenko announced in February that the systems could be deployed near the capital of Minsk, despite previously suggesting that older S-300 systems were more than sufficient for the country's defense.

The S-400 Triumf is Russia's new long- and medium-range surface-to-air missile system. The platform was designed to destroy aircraft, cruise missiles, and ballistic missiles. It could also be used to target ground installations.

The S-400, which can also launch 40N6 missiles, was developed to engage targets at a distance of up to four hundred kilometers at up to six times the speed of sound, and at an altitude of up to thirty kilometers. It entered service with the Russian military in 2007.

The S-400 is viewed as a significant improvement over the S-300 on several performance fronts. Whereas the S-300 was explicitly designed as a long-range air defense system, the S-400 is compatible with four missiles that are meant to satisfy a wide spectrum of operational categories: extremely long-range 40N6E (four hundred kilometers), long-range 48N6 (two hundred fifty kilometers), medium-range 9M96e2 (one hundred twenty  kilometers), and short-range 9m96e (forty kilometers).

The S-400 has also been widely exported, much to the dismay of the United States and NATO. Turkey’s purchase of the S-400 missile system created a wedge between Ankara and some NATO allies, including the United States.

As a result, Turkey was ejected from the Lockheed Martin F-35 Lightning II Joint Strike Fighter program. Washington has maintained that the two platforms are not compatible while fears have been raised that Russia could use Turkey's Triumf systems to determine weaknesses with the F-35.