Russia‘s S-400 Could Be Permanently Deployed to Belarus 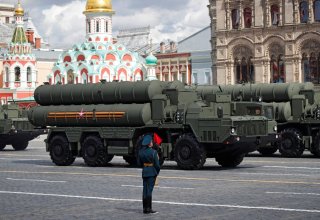 As the United States and NATO begin to deploy more combat aircraft to Poland—including an undisclosed number of U.S. Air Force F-15 Eagle fighters—Russia may be responding by permanently stationing its most advanced air defense system near the Belarusian capital.

"We may deploy them somewhere east of Minsk or near Minsk and we will keep an eye on what is going on in Kiev, beyond Warsaw and so on," Lukashenko told journalists following his visit to the Osipovichi training ground, the BelTA news agency reported.

Belarus Training With the Triumf

According to TASS, the Belarusian head of state also confirmed that there are already S-400 systems in the republic, which are being "mastered by the Belarusian servicemen" at the training center.

"If necessary, we will deploy a couple more systems, although we don't need more," Lukashenko added. "We are talking about purchasing several of these systems."

The Belarusian leader suggested that the previous S-300 systems were more than sufficient for the country's defense. But it seems that Moscow could push its ally to permanently station the advanced S-400 closer to Poland and within range of multiple other NATO countries.

The Russia-built S-400 Triumf is the latest long-and-medium-range surface-to-air missile system and is designed to destroy aircraft, cruise, and ballistic missiles, and can also be used against ground installations. The S-400, which can also launch 40N6 missiles, was developed to engage targets at a distance of up to 400 kilometers at up to six times the speed of sound, and at an altitude of up to thirty kilometers. It entered service with the Russian military in 2007.

The S-400 has also been seen as a significant improvement over its S-300 predecessor on several performance fronts. Whereas the S-300 was explicitly designed as a long-range air defense system, the S-400 is currently compatible with four missiles that are meant to satisfy a wide spectrum of operational categories: extremely long-range 40N6E (400 kilometers), long-range 48N6 (250 kilometers), medium-range 9M96e2 (120 kilometers), and short-range 9m96e (40 kilometers).