Russia Is Deploying S-400s to Belarus Ahead of Joint Exercises 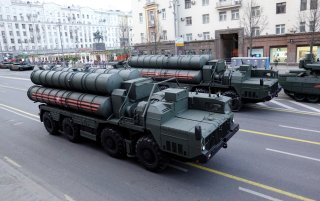 Russia has redeployed two S-400 “Triumf” missile defense systems to Belarus, according to a statement issued by Russia’s Defense Ministry.

“Two divisions of anti-aircraft missile systems (SAMS) S-400 Triumph of the air force and air defence formation of the Eastern Military District, involved in the inspection the reaction forces of the Union State, marched to the loading station in the Khabarovsk territory, where they loaded equipment onto railway platforms,” the statement read. “Upon arrival at the places where training tasks are performed, Russian servicemen will carry out equipment and camouflage of launch positions, maintenance of equipment and take up training combat duty on air defence as part of the unified regional air defence system of Belarus and Russia.”

The statement added that the operation will take place in two stages. First, the missile defense equipment and all associated personnel will be deployed on Belarusian territory and fully inspected through February 9. The S-400 systems will then participate in the Union Resolve 2022 joint drills with Belarus that are scheduled from February 10-20. According to the Russian Defense Ministry, the drills will include measures aimed at “suppressing and repelling external aggression, as well as countering terrorism and protecting the interests of the Union State.” The Union State refers to a national integration framework between Russia and Belarus that harkens back to a 1999 treaty between the two countries.

“During the exercise, measures will be carried out to strengthen the protection of the state border to prevent the infiltration of armed groups of militants, to block the channels of delivery of weapons and ammunition, as well as to search, block, destroy illegal armed formations and sabotage and reconnaissance groups of a mock enemy,” the statement read. The drills will be conducted across at least five different training grounds in Belarus. Neither side has confirmed how many Russian and Belarusian personnel will take part in Union Resolve 2022 exercises, nor is it clear what other kinds of military equipment will be involved.

The S-400 “Triumf” is an advanced Russian advanced surface-to-air missile (SAM) that first entered service in 2007. Belarusian president Alexander Lukashenko said repeatedly over the past year that he is interested in purchasing S-400 systems, but the status of any possible import talks remains uncertain. Lukashenko indicated earlier that several S-400 regiments are already in Belarus, but did not clarify if Minsk owns the systems in question. “We've set up a center and are training personnel. Russia has supplied S-400 systems to this center. We need one for studies. Training is already in progress,” Lukashenko said in a December 2021 interview with Russian state media. “We train our guys in this training center,” Lukashenko added. “I'd like to ask the president [of Russia] to leave this system here.”