The (Russian) Empire Strikes Back: Are Russia and Belarus about to Merge? 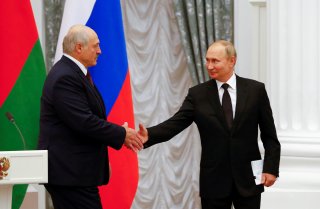 Belarusian president Alexander Lukashenko met with his Russian counterpart Vladimir Putin on Thursday to sign a flurry of documents paving the way for a full national merger. But how did we get here, and what comes next?

As the result of a meeting in Moscow that lasted nearly four hours, the two leaders announced the approval of twenty-eight integration programs. As noted by Putin, their current priority is to implement the economic provisions outlined in the Union State treaty of 1999. “This is a major effort which mostly concentrates on the economy, finance and industrial policy, which is vital, especially now that the world is facing the aftermath of the coronavirus infection, which weighed on economies around the world with global GDP down more than 3 percent and trade losing even more,” he said. These points include the convergence of macroeconomic policies and currency regulations, the integration of consumer payment systems, common consumer rights protections and tourism laws, and steps toward unified industrial and agricultural policies. Russia will continue to supply its Union State partner with natural gas at heavily subsidized prices, with plans to establish a common gas market in coming years. Moscow will provide another $630 million in loans to Belarus through 2022, the latest in a series of Russian financial aid packages to stabilize the struggling Belarusian economy amid Lukashenko’s ongoing standoff with the West. These steps are the precursor to a deeper set of political integration programs, with Putin telling reporters that a Union State Parliament will likely be established in the future. The Putin-Lukashenko meeting overlaps with Zapad-2021, a massive series of joint drills auguring an unprecedented degree of military cooperation—and possible integration—between the Russian and Belarusian Armed Forces.

The meeting spells the end of an era for Lukashenko, who has built his career on what he and his government proudly called a “multi-vector foreign policy.” The Belarusian leader has, for years, fostered a productive working relationship with the West (and, more recently, China) to counteract what would otherwise be his one-sided dependence on the Kremlin. Lukashenko’s strategic vision was that of a geopolitically nimble Belarus, deftly maneuvering between larger and more powerful neighbors to preserve its economic interests and national sovereignty. The Belarusian president tried to present the results of the September 9 meeting as a mutually beneficial fait accompli, decided as far back as the 1999 Union State treaty. “I would like to ask the critics of our integration in Russia as well: where do you see a ball chained to Russia’s legs? There are no downsides for either Belarusians or Russians in these programmes—and there could not be,” Lukashenko said. “As President Putin mentioned, the aim of all these measures is to improve the welfare of our peoples. And it is probably time to put a lid on this matter. Our integration was coined to be mutually beneficial and nothing else.”

But Lukashenko, who has presided over Belarus for over two decades, is not nearly the principled and enthusiastic supporter of integration that observers of his Thursday performance might conclude him to be. The past years saw a Lukashenko government in no hurry to formalize the treaty’s integration provisions, instead leveraging closer ties with Western governments to pressure the Kremlin into greater economic concessions. As late as May 2020, Lukashenko moved forward with signing an oil import agreement with the Trump administration as a message to Moscow.

Then came the 2020 Belarusian presidential election. Lukashenko beat opposition candidate Sviatlana Tsikhanouskaya with just over 80 percent of the vote, triggering outcries of electoral fraud from a chorus of Western capitals that formally or implicitly refused to accept the outcome. Lukashenko’s embattled government fell under a renewed Western sanctions regime, the crippling economic effects of which it is still trying to mitigate. Tikhanovskaya fled the country and established something of a government-in-exile in nearby Lithuania, which formally recognized her as the President of Belarus shortly following the election. Lukashenko’s already-precarious situation worsened with his decision to ground an airliner in order to arrest Belarusian opposition activist Roman Protasevich, and amid recent accusations from Poland and the Baltic States that Minsk is weaponizing migrant inflows against its NATO neighbors. Now branded as not only a dictator but as a terrorist by his detractors, and reeling from wave upon wave of unrelenting U.S.-EU sanctions, Lukashenko faces by far the direst challenge of his twenty-seven-year tenure as the leader of Belarus.

It is in this context that Lukashenko, having exhausted all other options, met with Putin to greenlight a Union State agreement that he has spent years successfully resisting—an agreement that not only washes away his principal foreign policy legacy, but casts a sunset on his personal political fortunes. Lukashenko, for all of his many undisputed faults, articulated and forcefully pursued a vision of Belarusian sovereignty that has now been dashed against the Kremlin’s domes. Policymakers from Vilnius from Washington can finally gaze upon the fruits of their labors. The Western maximum-pressure campaign against Mink has achieved a grotesque version of its intended purpose: the Lukashenko government, as we know it, is no more. What is fast emerging in its place is a Russian outpost, willingly absorbed by its larger and more powerful neighbor following an ill-conceived regime change program sponsored by the West itself.