Zapad 2021: What Is Behind Russia’s Latest Massive Military Exercise? 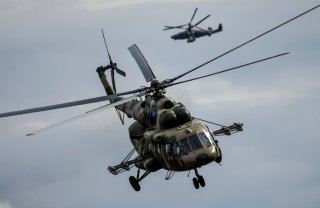 Russia’s military is fast approaching what will be one of its largest military exercises in 2021, set against the backdrop of mounting tensions with Poland, Ukraine, and the Baltic states.

Zapad—Russian for “west”—is the latest in a rotating cycle of quadrennial Russian drills, preceded by Kavkaz (“caucasus”) 2020, Tsentr (“center”) 2019, and Vostok (“east”) 2018. Although they are primarily a means of evaluating the battle-readiness of Russia’s four military districts—Western, Eastern, Central, and Southern, respectively—these exercises have regularly drawn regional participants in their recent incarnations.

The 2021 edition of Zapad will be held at fourteen practice ranges spread across Russia and Belarus. The Belarusian Ministry of Defense reported that the drills will involve as many as 12,800 Russian and Belarusian personnel, with around 400 of the latter participating on Russian territory. Defense expert Michael Kofman noted that these numbers do not comport with the reality on the ground, as there already appear to be far more Russian troops in Belarus than what is being reported. Kofman added that the organizers are likely distorting troop presence figures to comport with the Vienna Document, which requires observers from the Organization for Security and Cooperation in Europe (OSCE) to observe exercises involving over 13,000 troops. Official figures assert that the drill will include up to 350 pieces of military hardware, including 140 tanks, 110 artillery systems, rocket launchers, and dozens of fixed-wing aircraft and helicopters. The drills are scheduled for September 10-16.

Russian and Belarusian officials have been mum on the scope and nature of the exercises, except to suggest that they will involve joint maneuvers aimed at repelling a notional attack by NATO forces. As explained by Kofman, this style of drill typically consists of two distinct phases. The first phase will test the ability of Belarusian and Russian forces to mobilize and deploy both active and reserve units in the opening days of a NATO invasion. The second phase involves the full breadth of Russian countermeasures aimed at degrading and defeating the notional Western offensive. If the precedent of Zapad 2017 is any guide, the upcoming drills will include the deployment of S-400 missile defense systems against simulated cruise missile attack, attack helicopter sorties against ground targets, armored column movements, and Iskander-M short-range ballistic missile (SRBM) firing exercises. But a large-scale conventional war with the West does not appear to be the only, or even primary, purpose of Zapad 2021, significant parts of which will be held on urbanized terrain. Experts have argued that the choice of terrain suggests a renewed focus on irregular warfare with NATO, as well as anti-riot maneuvers.

Several of Russia’s western neighbors, including Poland, Latvia, and Ukraine, have registered grave security concerns with the upcoming drills. The dire warnings of Eastern and Central European NATO members mirror much of the alarmist rhetoric surrounding Zapad 2017, but, both then and now, there is no indication that the Kremlin plans to use the drills as cover for any sort of military aggression or intervention. Zapad 2021 is, rather, a full-throated assertion of Moscow’s rapidly deepening ties—defense and otherwise—with Minsk, in the wake of an acute political crisis that rocked the Lukashenko regime in the summer of 2020 and continues to reverberate into the present day.