Vostok-2018: Russia (with China Making a Guest Appearance) Set for Largest Wargames in over Three Decades 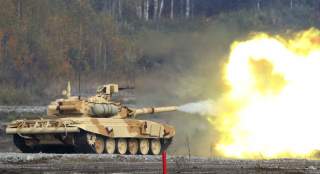 Russia is set to conduct what it says will be its largest wargames in over three decades during Vostok-2018 (or East-2018).

The Chinese People’s Liberation Army and Mongolia will also contribute forces to the East-2018 wargames, which highlights the growing closeness between Beijing and Moscow as the two great powers make common cause to challenge Washington’s dominance of the liberal international world order.

"It is going to be the largest one since Zapad-81 [or West-81],” Russian Defense Minister Sergei Shoigu told the state-owned TASS news agency on August 20. “It will be unprecedented in terms of geographic scope and the strength of command and control centers and forces due to participate.”

While the Russian wargames will likely be significant, they are not likely to match the scale of the 1981 Soviet Zapad exercises. “Shoigu said it would be the largest exercise since Zapad, but not necessarily on that scale,” Michael Kofman, a senior research scientist at the Center for Naval Analyses specializing in Russian military affairs, told The National Interest. “The MoD has a tendency to inflate the participant count, particularly for exercises in the Far East.”

The Russians tend to use creative methods to inflate troop counts during major exercises such as Vostok. “Well, immediately after [the last] Vostok they claimed they had 100,000 participating, which is a oddly round number, and then later on they claimed 155,000,” Kofman said. “That figure was not believable and appeared to be creative accounting.”

Nonetheless, the Vostok-2018 wargames are likely to be far larger than the overhyped Zapad-2017 exercises that caused much consternation in Eastern Europe last year. “I'd expect a quite larger exercise than Zapad 2017, which was small compared to expectations,” Kofman said.

Shoigu added that in addition to Russian forces, Chinese and Mongolian forces would also participate in the massive wargames. “Involved in the exercise will be the Eastern and Central military districts, the Northern Fleet, Airborne Troops, and long-range and military transport aircraft, as well as command centers and forces of China’s and Mongolia’s armed forces,” Shoigu told TASS.

One of the reasons that Russia invited Chinese forces to the exercise was to defray any concern in Beijing that the wargames are directed towards China. “They had to involve the Chinese to make sure this didn't appear to be a counter-China exercise, but the scenario will be revealing,” Kofman said. “China's participation was a must to avoid the optics that such an exercise might generate, and a good way to solve the inherent distrust between powers is to have them be a part of it.”

Beijing confirmed that its forces are taking part in the East-2018 wargames at the Tsugol training range in Russia’s Trans-Baikal region from September 11 to 15. “The drills are aimed at consolidating and developing the China-Russia comprehensive strategic partnership of coordination, deepening pragmatic and friendly cooperation between the two armies, and further strengthening their ability to jointly deal with varied security threats, which are conducive to safeguarding regional peace and security,” the Chinese Ministry of National Defense told the China’s official Xinhua news service. “The military exercises are not targeted at a third party.”

The Chinese PLA expects to deploy some 3,200 troops, more than 900 pieces of weaponry and 30 fixed-wing aircraft and helicopters to the East-2018 exercise. The Chinese expect to “conduct fire strike and counter-attack training, among others,” Xinhua said, citing the Chinese Defense Ministry. Indeed, the Russian Defense Ministry has noted that some Chinese forces have already started to arrive in Trans-Baikal for the wargames.

“The first four echelons with military equipment and servicemen of China’s People’s Liberation Army arrived in Transbaikal to participate in Vostok-2018 large-scale exercises,” the Russian Defense Ministry said in a statement on August 21. “About 120 units of military and special equipment arrived in the military echelons. After unloading, some of the military equipment has already marched to the Tsugol training ground for field camp equipment. During the march of the Chinese army column, was accompanied by military police units of the Armed Forces of the Russian Federation.”

While some Russian commentators like to point to joint training exercises between Beijing and Moscow as evidence of the growing strategic partnership between the two great powers, the Chinese are generally more subdued. However, in the case of the East-2018 wargames—which were until this year limited to Russian (and Soviet before 1991) forces only—Chinese official media are also pointing to the exercises as evidence of the new Moscow-Beijing entente. “The Chinese troops’ participation in the Russian military drills shows that China-Russia comprehensive strategic partnership of coordination is further deepening in the military and security fields,” wrote authors Guo Yuandan and Liu Yupeng in the Chinese Communist Party’s Global Times paper, which was also republished on the PLA-sponsored ChinaMil.

And while Beijing’s official line might be that the East-2018 exercise is not directed at any other power, Chinese editorials republished on official government sites clearly indicate that China hopes that it can partner with Russia to challenge the United States. “Objectively, the purpose of the large military drills by China and Russia is self-evident,” reads an op-ed republished on the PLA’s ChinaMil site. “Some hegemonic powers target China and Russia as their biggest threats, giving heavy blows to the two countries in political, economic and military areas. Such actions have severely threatened regional and even global peace and stability. Therefore, China-Russia alliance is a reasonable stance against the hegemonic impulse and for safeguarding peace and stability of the region and the world.”

Even American experts on Russia are starting to accept the possibility of a genuine Beijing-Moscow entente directed against the United States. “I think a strategic partnership is slowly in the offing, but is encumbered by the two sides' self-interest and transactional impulses,” Kofman said. “As such, the catalyst will be a third actor, namely the United States, and the extent to which those countries perceive a threat from Washington in common.”