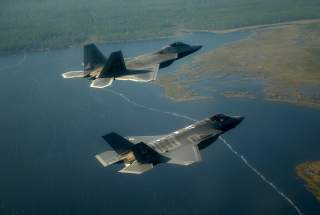 During the squadron’s current deployment, the unit flew a pair of Raptors together with stealthy fifth-generation Royal Norwegian Air Force Lockheed Martin F-35A Joint Strike Fighters during an F-22 forward deployment to Orland Air Base, Norway, Aug. 15, 2018. The event marks the first time that the Raptor has flown in during a training exercise with European-owned and operated F-35s.

According to the United States Air Force, two Norwegian F-35A Lightning IIs flew in formation and conducted training operations with a pair of F-22As, which were forward deployed to Orland from their European deployed base at Spangdahlem Air Base in Germany. The 95th Fighter Squadron, which is part of the 325th Fighter Wing, arrived in Germany on August 8 from their home station at Tyndall Air Force Base in Florida.

“The U.S. Air Force has deployed one squadron of F-22 Raptors, Airmen and associated equipment to Spangdahlem Air Base, Germany, from the 95th Fighter Squadron, 325th Fighter Wing, at Tyndall AFB, Fla., to conduct air training with other Europe-based aircraft as part of a Flying Training Deployment,” the U.S. Air Force in Europe said in a statement. “The F-22s arrived Aug. 8 and will remain in Europe for several weeks. This training deployment to Europe is funded in part by the European Deterrence Initiative. The F-22s will also forward deploy from Germany to operating locations within other NATO member nations in order to maximize training opportunities while strengthening the NATO alliance and deterring regional aggression.”

In addition to the 95th Fighter Squadron’s training activities with the Norwegian F-35s, the unit’s Raptors have been training with several other NATO partner nations in recent days. On August 10, a pair of F-22As arrived at Larissa Air Base, Greece, to conduct local training with Greek forces. On August 14, the U.S. Air Force forward deployed five F-22 Raptors, approximately 40 Airmen and associated equipment to Powidz AB, Poland, for theater familiarization and to conduct interoperability training with Polish and NATO aircraft. Those aircraft also conducted a flyover during the celebration of the 100th anniversary of Polish independence and Armed Forces Day in Warsaw on Aug. 15. Subsequently, a pair of Raptors deployed to Albecete Air Base, Spain, for a one-day deployment to train with Spanish forces.

The idea behind the F-22 deployment is to “demonstrates U.S. Air Forces in Europe's commitment to field and operate fifth-generation aircraft in the U.S. European Command area of responsibility,” the U.S. Air Force said. “The deployment also underscores our commitment to the collective defense of the NATO alliance and our willingness to deploy and use our most technically advanced assets to deter any potential aggression and increase regional security.”

However, while deploying the F-22 to Europe might help to deter Russia and reassure allies, it might be a net negative for the effectiveness of the tiny 186 aircraft Raptor fleet, of which only about 80 aircraft are available for operations at any given time. Training with allies actually diminishes F-22 pilot skills and training because those crews are not allowed to exploit the full capability of their fighters in order to prevent compromising the jets’ security.

“F-22 units are often directed to participate in exercises as part of Air Force efforts to build relationships with partners,” notes a recent report from the Government Accountability Office. “However, due to security concerns regarding exposing the F-22’s unique capabilities, F-22 pilots may be restricted from flying the aircraft the way they would in combat, according to Air Force officials. As a result, the value of the training is reduced and these types of exercises can result in the F-22 pilots developing bad habits that must be corrected in future training, according to Air Force officials.”

The U.S. Air Force will have to address this problem at some point, but that is a different story for a different article.