Stealth F-22 Raptors Are in Europe with One Goal in Mind: Deter Russia 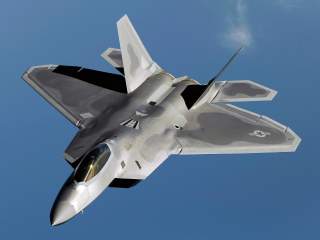 The jets, which can cruise at supersonic speeds without afterburners and which typically operate at higher altitudes than most fighters, are being deployed to Germany to deter any potential Russian aggression.

“The U.S. Air Force has deployed one squadron of F-22 Raptors, Airmen and associated equipment to Spangdahlem Air Base, Germany, from the 95th Fighter Squadron, 325th Fighter Wing, at Tyndall AFB, Fla., to conduct air training with other Europe-based aircraft as part of a Flying Training Deployment,” the United States Air Forces in Europe (USAFE) said in a statement released on August 8.

“The F-22s arrived Aug. 8 and will remain in Europe for several weeks. This training deployment to Europe is funded in part by the European Deterrence Initiative.”

The Raptors will use Spangdahlem as staging ground to deploy to other parts of Europe in order to maximize potential training opportunities with America’s European NATO allies.

“The F-22s will also forward deploy from Germany to operating locations within other NATO member nations in order to maximize training opportunities while strengthening the NATO alliance and deterring regional aggression,” the USAFE said.

The U.S. Air Force had previously announced the F-22 deployment to Europe, however, the service had refused to confirm if the aircraft being sent to the continent was the Raptor or its Lockheed Martin stable mate, the F-35 Joint Strike Fighter.

“I would like to announce that we will be welcoming back U.S. 5th Generation assets into the European theater later this summer,” Gen. Tod D. Wolters, commander U.S. Air Forces Europe and U.S. Air Forces Africa, told reporters during a teleconference on July 25 .

“These assets will work with U.S. and allied forces that are already in Europe including partner nation 5th Generation assets to build on the integration from previous deployments. The integration of 5th Generation assets allows the coalition to maintain the air superiority advantage by complementing the capabilities of our powerful 4th Generation fleet. These assets continue to be a game-changer in developing the right size and mix of capabilities to compete, deter and if required, win.”

It is unclear why Wolters would not discuss which airframe the U.S. Air Force planned to deploy to Europe at the time. However, Wolters did discuss the reasons behind why the Air Force wanted to send the jet over to Europe.

“And on top of all that, we’ll do all that we can with the 5th Generation asset to work on our campaign design of enhancing indications and warnings, command and control/feedback, and mission command.”

It makes sense to familiarize European partners with American F-22 tactics, techniques and procedures in order to make sure those allies know how to work with the Raptor during combat operations. Despite President Donald J. Trump’s rhetoric attacking America’s NATO allies, the alliance will almost certainly outlast the current administration. Thus, it is important that U.S. and European forces are able to operate seamlessly together for the foreseeable future—especially when most of those air arms are likely to operate American-made fifth-generation fighters, the F-35, during any future conflict.

“The F-22 and the F-35 are the world's premier operational 5th-generation fighters, possessing a unique combination of stealth, speed, agility, and situational awareness along with lethal long-range, air-to-air and air-to-ground weaponry, making these aircraft the best air dominance fighters in the world,” the USAFE said.

“Their presence in the European theatre underscores our ability to deter current and potential threats, assure our allies, and respond in a timely way should deterrence fail.”