Russia Is Getting New Tanks (But Don't Get Too Excited) 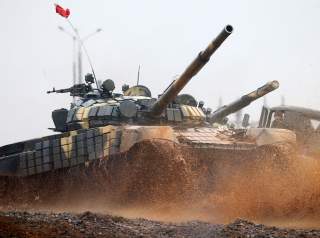 While the upgraded and highly capable T-72B3 will remain the mainstay of the Russian Ground Forces, the Kremlin’s armored forces are receiving a significant boost in capability with the addition of the new T-90M and the T-14 Armata main battle tanks. Indeed, upgraded T-90M has proven itself to be superior in performance by a large margin over the original T-90A, which is currently in service with the Russian Ground Forces.

“By its combat efficiency, the T-90M tank considerably excels its predecessor, the T-90A,” manufacturer Uralvagonzavod told the Russian state-owned TASS news agency during the Army-2018 tradeshow in Moscow. “The participation of T-90M tanks in the Zapad-2017 drills fully confirmed the armored vehicle’s performance characteristics required by the Defense Ministry of Russia."

But the T-90M—which incorporates a more powerful engine and Relikt explosive reactive armor package amongst other improvements—is not only new armored vehicle that is entering service this year.

The first nine T-14 Armata main battle tanks are also set to be delivered to the Russian Ground Forces this year. "Today, a contract has been signed for 132 T-14 and T-15 vehicles,” Russian deputy defense minister Alexei Krivoruchko told TASS. “We will get the first nine this year."

All 132 T-14 tanks and T-15 infantry fighting vehicles are expected to be delivered to the Russian Ground Forces by 2021. It is not clear how many additional orders the Kremlin will place for the expensive Armata platform, but it is likely that production will continue indefinitely in the future. Nonetheless, the Armata vehicles will likely continue to be reserved for small niche forces while the more affordable T-72B3 will form the backbone of the Russian armored forces.

Nonetheless, Uralvagonzavod continues to harbor ambitions to build a new heavy tank variant of the Armata equipped with the a 152mm cannon in the tradition of the Soviet World War Two-era ISU-152 tank destroyer. However, it is not clear if the Russian Ministry of Defense is interested in such a vehicle. "There are technical resources to create a tank on the Armata platform," a Russian defense industry source told TASS. "The decision is up to the client, the Russian Defense Ministry."

There does seem to be a revived Russian interest in developing armored vehicles designed around anti-tank guns. At the Army-2018, manufacturers showed off vehicles equipped with a new 57mm anti-tank gun mount on an infantry fighting vehicle chassis. One example is a T-15 Armata armored fighting vehicle variant equipped with a powerful 57mm gun while another is the Sprut-SDM1, which features a 125mm gun, that Russia is offering for export.

"This is a unique weapon that has no analogs in the world,” Rosoboronexport CEO Alexander Mikheyev told TASS. “The Sprut-SDM1 is the sole light floating combat vehicle in its class possessing the firepower of the main battle tank.”

The Russians hope to export the amphibious vehicle to nations that feature difficult terrain but need heavy mechanized firepower. "It can be landed from a ship and can operate day and night on the terrain inaccessible for other similar vehicles,” Mikheyev said. “Rosoboronexport expects enhanced interest in this product from countries with complex geographical conditions combining the presence of water obstacles, bogs and mountains. Specifically, some states in Southeast Asia are already displaying interest in the Sprut-SDM1."

While the Russians are starting to field new hardware and are showing off new capabilities at the Army-2018 show, fundamentally, nothing has really changed. While the Armata series, T-90M and other vehicles will enter service with the Russian military in small numbers, but backbone of the force will remain the T-72B3 and other upgraded versions of existing vehicles. Indeed, Russia does not need vast numbers of machines like the Armata to dominate its neighbors in the post-Soviet space.