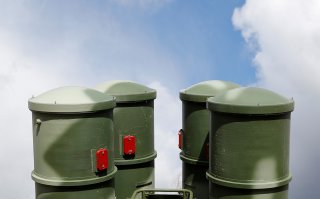 The S-400 Triumf surmounted a tortured development cycle to become one of the world’s leading missile defense systems and a pivotal Russian export product.

The air defense system that eventually became the S-400 began as an advanced S-300 modernization project. The S-300PMU-3 was conceived in the early 1990s as a major iteration of the S-300 platform, replete with new missiles that improve the S-300’s performance and enable it to fill new roles. As with many 1990s military hardware projects, the S-300PMU-3 struggled for consistent funding in the wake of the Soviet collapse. The system ran into further technical troubles in the early 2000s, amid concerns that the S-300PMU-3’s performance was being throttled by aging holdover components from the 1970s S-300P.

Nevertheless, the first S-400 units began to enter service in 2007. The S-400 is comprised of four core components: 1) the 30K6E battle management system, consisting of a command post and acquisition radar, 2) as many as six 98Zh6E Fire Units and twelve transporter-erector-launchers (TEL’s), 3) an assortment of surface-to-air missiles (SAM), and the 4) 30Ts6E logistical support system for missile storage and equipment maintenance.

The 30K6E battle management system can control a diverse cast of earlier Soviet missile defense units, meaning that the S-400 can coordinate with several S-300 variants, numerous entries from the TOR family of anti-air systems, and Pantsir S-1 missile system.

The S-400 presents a vast leap in performance and capabilities over earlier S-300 models. To begin with, Triumf is markedly more versatile than its predecessor: while the S-300 is explicitly a long-range air defense system, the S-400 is equipped with four missile types to satisfy a broad spectrum of combat roles: very long-range 40N6E (400 kilometers) missiles, the long-range 48N6 (250 kilometers), medium-range 9M96e2 (120 kilometers), and short-range 9m96e (40 kilometers). The S-400’s wide array of missiles is accompanied by significant new features, including anti-ECM tools against jamming as well as tracking/targeting updates to partially counter the widespread use of stealth fighter technology. In keeping with the growing prevalence of drones and saturation strategies, the S-400 can simultaneously engage up to 80 targets and 160 guided missiles. Unlike its S-300 predecessor, the S-400 has not yet spawned any derivative models.

Over the past decade, the Kremlin has succeeded in inking a slew of major S-400 export contracts. It has a long list of high-profile customers such as China, Turkey, and India; moreover, Iraq, Egypt, Vietnam, Qatar, and Saudi Arabia are among those that have expressed interest in purchasing the system in recent years.

Dozens of S-400 battalions currently serve across Russia’s five military districts, for a total of fifty-six battalions or twenty-five regiments. It is unknown how many more S-400s Russia plans to procure for its own armed forces, and how quickly. Though it is technically due to be succeeded in the coming years by the imminent S-500, it is clear that the Kremlin has no intention of phasing out the Triumf anytime soon. Rather, the S-400 is set to serve alongside the more powerful, but also much more expensive, S-500 in the decades following its introduction.

Mark Episkopos is a national security reporter for the National Interest