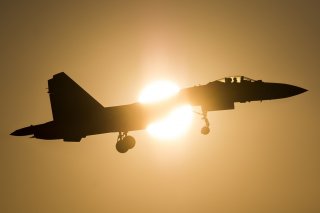 Over one decade after its introduction, the Su-35 remains Russia’s best air superiority fighter and more than rivals many of its western 4th generation counterparts.

As with many of the major military projects that survived the chaotic transition between from the Soviet Union to the Russian Federation, the Su-35 has a long and winding development history. In the 1980s, the Soviet aircraft industry set about designing an upgraded Su-27 with new avionics, engines, and aerodynamic improvements. This new fighter entered production in 1988 as the “Su-27M,” but was later renamed the “Su-35”— the project stalled from a lack of funding in the aftermath of the Soviet collapse and ground to a halt in 1995, with only three serial models produced.

The Su-35 that the Russian Air Force operates today is actually called the Su-35S, technically a different fighter with its roots in an early 2000’s modernization effort to narrow the emerging technical gap between aging Soviet aircraft and western 4th generation fighters.

The new Su-35 entered serial production in 2007, exhibiting a number of striking design features. Its capable Saturn AL-41F1S engines support supercruising, or the ability to sustain supersonic flight without the use of afterburners  Gone were the canards of prior variants, replaced by thrust vectoring nozzles that contributed to impressive maneuverability gains in certain dogfighting scenarios. The Su-35S shipped with a major avionics overhaul, including a digital fly-by-wire flight control system, the IRBIS-E phased array radar and an onboard infrared search and track (IRST) system. No less importantly for its air superiority role, the Su-35 boasts an offensive electronic countermeasures (ECM) suite that can feasibly jam the F-16’s AIM-120 AMRAAM and similar air-to-air missiles.

But where the Su-35 really shines against competitors like the F-22 Raptor is payload capacity and versatility, boasting an expansive weapons suite spread across a whopping 12 hardpoints. The improved R-74 short-range air-to-air missile boasts a range between 25 to 30 miles and supports off-boresight fire, meaning that the Su-35 pilot can target an enemy aircraft by looking at it through their helmet within a certain range of view. Meanwhile, the Su-35’s R-77 fills the medium-range air-to-air engagement niche. What separates the Su-35 from many, similarly positioned air superiority fighters is that it can competently fill a ground-attack role if needed, supporting a vast catalog of TV, laser, and satellite-guided bombs in addition to some of Russia’s latest anti-ship and air-to-ground missiles. Despite largely playing an air deterrence role during the Russian intervention into the Syrian Civil War, Su-35’s reportedly bombed militant positions at least on several occasions throughout that conflict.

Around 115 serial Su-35’s are currently in service throughout Russia’s Air Force, with upwards of 50 more models having been ordered through recent export deals with partners including China and Egypt.

Initially intended as a stopgap solution to fill Russia’s air superiority needs until the fifth-generation Su-57 enters service, the Su-35 has proven itself as a highly formidable fighter in its own right. The initial performance gap between the upcoming Su-57 and current Su-35 is expected to be relatively small, especially until the former begins to ship with its new Izdeliye-30 engines.

Considering its consistently impressive performance, cost-effectiveness, and role versatility, it’s unlikely that Moscow will attempt to aggressively phase out the Su-35 even as dozens of serially produced Su-57’s are projected to enter service over the coming decades.