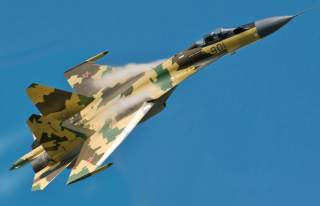 Russia’s high-tech Sukhoi Su-35 Flanker-E fighter is making its way to the country’s west. Most earlier copies of the Su-35 fly from Russia’s Far East.

Zvezda T.V. news channel in late January 2020 broadcast footage of Su-35s taking off from an airstrip in the Republic of Karelia, a region of Russia bordering Finland.

Zvezda claimed the Su-35s were from the first batch of the jets destined for the Kremlin’s western military district.

The Russian air force possesses around 90 Su-35s and has been buying fresh copies at a rate of around 10 per year.

The twin-engine, heavyweight fighter, a development of Sukhoi’s Cold War-vintage Su-27, is in production alongside Su-57 stealth fighters, much in the same way the U.S. Air Force simultaneously is buying both non-stealthy F-15EXs and stealthy F-35s.

At nearly $100 million per copy, the conventional designs aren’t necessarily cheaper than the stealth models are, but they arguably are more reliable and, in the short term, more capable than the newer jets are as the latter undergo late-stage development and operational testing.

The Su-57, while possessing radar-evading qualities, lacks key combat systems and apparently suffers from quality-control problems during production. Moscow has ordered scores of Su-57s, but the more the Su-57 falters, the more attractive the Su-35 could become as an alternative to the newer type.

Sukhoi began developing an early version of the Su-35 back in the 1980s. The Russian economy’s collapse slowed acquisition of the type. The Kremlin didn’t order the first production batch of so-called “Super-Flankers” until 2009.

Compared to the Su-27 that preceded it, the Su-35 features a more modern digital cockpit, a more advanced radar and greater maneuverability thanks to its thrust-vectoring AL-41F1S engines.

The Super-Flanker’s engine is notable, as it forms the basis of the Su-57’s own AL-41F1 engine. A more powerful motor is in development for the Su-57, but it’s unclear when the Kremlin might order large quantities of the type.

The Russian air force in late 2018 declared the Su-35 to be fully operational, but it flew in combat years earlier. Moscow in 2016 deployed a contingent of Su-35s to Syria, where the type flew air-defense patrols safeguarding Russian and Syrian strike aircraft attacking civilians, hospitals and anti-regime rebels.

“They're probably flying with R-77-1 to show us they have them, but realistically don't expect to be doing air to air combat with Western forces,” Michael Kofman, a research scientist specializing in Russian military affairs at the CNA Corporation, told The National Interest.

Six Russian Tu-95 heavy bombers and several Su-35s probed U.S. air-defenses in May 2019, prolonging a period of aerial tension between the Moscow and Washington.

Iranian and Russian media in December 2019 reported that Russian Su-35s scrambled from Russia’s air base in northern Syria to intercept a Israeli warplanes reportedly attacking a Syrian regime base. The Israeli planes apparently avoided a direct confrontation with the Super-Flankers.

China, Indonesia and Algeria all have ordered small numbers of Su-35s. The Chinese acquisition is controversial, as Moscow fears Beijing might reverse-engineer the type and produce its own, cheaper copies. China previously reverse-engineered several Russian fighter design, including the Su-27.

The United States in 2018 imposed sanctions on China for purchasing the Su-35s, as the purchase violated the U.S. Countering America’s Adversaries Through Sanctions Act.

Turkey and Russia in September 2019 reportedly began discussing a potential Turkish acquisition of Su-35s. The discussions began after the U.S.-led F-35 program ejected Turkey over Turkey’s insistence on buying Russian air-defense systems that could gather sensitive data on the F-35.