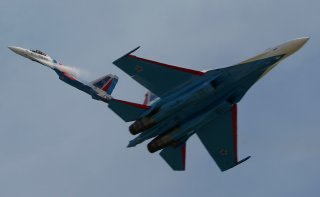 This week it was reported that the Russian Aerospace Forces (RuAF) will be purchasing another batch of the Su-35 fighter jets in a contract worth seventy billion rubles or roughly $927 million. Designated the “Flanker-E” by NATO, the Su-35 is a “4++ generation” fighter that has proven itself to be a very capable foe to current U.S. aircraft, including the F-15 Eagle, the F-18, and even the F-35 Lightning II. Essentially an upgraded version of the Cold War Su-27, the Su-35S was developed by the Sukhoi Company, which is part of Russia’s United Aircraft Corporation (UAC) and it is serially produced at the Komsomolsk-on-Amur Aviation Plant (KnAAZ).

“By the end of the year, we plan to conclude an additional state contract for the supply of multifunctional Su-35S aircraft,” Russian defense minister Sergei Shoigu told reporters during his meeting last week with representatives of the Sukhoi plant, which manufactures the Su-35 and Su-57 jets DefenseWorld reported. “The contract amount will amount to 70 billion rubles. Actually, we came for this, to make sure that the enterprise is able to fulfill this contract.”

The RuAF has ordered some forty-eight of the Su-35S jets, and DefenseWorld reported that the number of deliveries of existing fighters is not known, but earlier orders were in batches of twelve, which is believed to be the manufacturing rate of the aircraft per year.

Sukhoi has produced the Su-35 for both the Russian Federation’s Ministry of Defense and for foreign customers, including Egypt, which ordered two dozen of the fighters to date with four of them recently delivered to Cairo—while the others are still likely in production.

In addition, China purchased another twenty-four of the fighters in 2015 in a sale worth $2.5 billion and in May 2020 Beijing accepted an offer from Moscow to purchase even more of the fighters.

“The Su-35 is a multi-purpose fighter jet capable of air combat and precision strike against land and surface targets,” senior Col. Wu Qian, Director General of the Information Office of China’s Ministry of National Defense, said during an April 26, 2018 press conference. “Currently, the aviation troop units of the PLA Air Force have been armed with the Su-35 fighters.”

Besides China and Egypt, Indonesia is another potential customer for the Russian-built aircraft.

The Sukhoi Su-35 Flanker-E is the top Russian air-superiority fighter in service today and represents the pinnacle of fourth-generation jet fighter design. It will remain so until Russia succeeds in bringing its fifth-generation PAK-FA stealth fighter into production. The aircraft is equipped with an airborne radar station with a passive phased antenna array, as well as engines with thrust vector control. It can reach speeds of up to 2.5 thousand kilometers an hour, its flight range reaches 3.4 thousand kilometers.

The fighter is armed with a thirty-millimeter cannon and has twelve attachment points for bombs and missiles. Distinguished by its unrivaled maneuverability, most of the Su-35’s electronics and weapons capabilities have caught up with those of Western equivalents, like the F-15 Eagle.

In March, Su-35S fighters provided the security for Minister Shoigu during his flight to Syria. So clearly when he was talking up the platform earlier this month it is clear he has firsthand experience seeing the fighter in action.