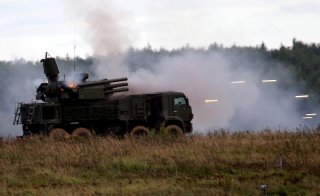 Last month has proven to be catastrophic for the credibility of one of Russia’s most touted air defense systems. The troubles for the Pantsir S1 air defense system in Libya began when Khalifa Haftar’s yearlong Tripoli offensive against the Ankara-backed Government of National Accord (GNA) began to collapse.

Believed to have been supplied to the Libyan strongman as early as last year by his backers in the Gulf, the Russian system was meant to be used as a trump card against Turkey’s combat unmanned aerial vehicle (UAV) air interdiction operations. Yet, after a major GNA counteroffensive last month, and the retaking of the strategic Al-Watiya airbase and key suburbs in Tripoli, it became clear that the system had been trounced. Analysis of open source data has estimated that up to 9 Pantsir units were lost in quick succession to UAV strikes during May, with footage of the strikes going viral on social media. To add insult to injury, a tenth Pantsir system was dramatically captured by GNA forces, and to great fanfare paraded through Tripoli as a war trophy. It is speculated that the captured Pantsir’s final fate is to be picked apart for intelligence purposes.

The Pantsir S1 system, NATO reporting name SA-22 Greyhound, should be considered significant for two reasons: it is the latest platform developed by Russia to fill the critical mission of short-range air defense (SHORAD), and the system has been used to great effect by Moscow as a defense export to penetrate geopolitically significant markets.

With the advent and proliferation of combat drones, the SHORAD mission has become increasingly critical on the modern battlefield. On paper, the system’s design appeared ideally suited for the mission. The Pantsir S1 comprises a central turret housing search and fire control radars, surface-to-air missiles, and dual 30 mm autocannons mounted on an 8x8 truck chassis. Conceptually, the canons could engage smaller drones and swarms while the missiles could engage medium to high altitude aircraft and UAVs at longer range.

The system traces its lineage to the Soviet Tunguska M1 system and is operated by the Russian Armed Forces as part of its layered air defense doctrine, supporting longer ranged systems such as the S-400.  As an indication of the degree to which the Russian military is taking the technology seriously, the baseline Pantsir S1 has been upgraded several times and now includes arctic warfare and naval close-in weapons system (CIWS) variants.

Due to its capabilities and accessible price point at approximately 15 million USD per unit, Moscow has capitalized on the system as a premiere defense export over the past two decades. Having been exported to at least 11 nations, Moscow has used the Pantsir to expand beyond its typical roster of customers and make inroads into markets of acute geopolitical significance – UAE, Iraq, and most recently this year, EU accession candidate Serbia, flouting US CAATSA sanctions.

While the success of the Pantsir as an export product is not in doubt, the system's operational effectiveness, particularly against UAVs – a threat countered ideally by SHORAD capabilities – has fallen under serious scrutiny.

On the heels of the Russian Ministry of Defense’s outlandish claims of the system shooting down US cruise missiles over Damascus in 2018, the first Syrian military losses of the system occurred in April of that year, and again in January of 2019, as part of Israeli strikes on Iranian assets in the country. In both cases, the IDF had released footage of the system’s destruction, leaving Moscow hard-pressed to explain the loss. While unrealistic to expect that a SHORAD system alone could counter the deep strike capabilities of the Israeli Air Force, it is worth highlighting that Israeli Harop kamikaze drones were believed to have been used in the strike.

In 2018 the system had found itself again under fire – this time when Russian forces engaged a drone swarm attack on Khmeimim Air Base. Although unable to be independently verified, it is alleged that Russian commentators raised the alarm as early as November 2018 on the deficiencies of the system, given its poor performance in the swarm attack. By 2019, Moscow saw the need to upgrade the baseline Pantsir S1 to the S1M, reportedly to better counter drones based on the experience gained in Syria.

The first true test against the system against large scale drone operations came in 2020 during the battle between Russia and Turkey and their respective proxies over Idlib. Throughout the conflict, Turkish combat drones in tandem with electronic warfare capabilities overmatched Syrian air defenders with minimal air losses over Northern Syria. Although there is debate over the final tally, targeting footage released by Turkey showed at least one Pantsir among the scores of Syrian vehicles neutralized by Turkish drones, which went viral on social media.

Before the onset of May of this year, in Libya, it appeared as if Khalifa Haftar’s Pantsir S1 units were showing results. For months there had been a steady stream of sightings involving downed drones – Turkish, Italian, and Haftar’s own Chinese Wing Loong UAVs (the latter from friendly fire incidents) – as well as reports of significant attrition among Turkish UAV units. Nevertheless, Ankara’s steady surge of expeditionary capabilities into Tripoli this year led to a situational picture similar to the recent conflict in Idlib – sustained large scale drone operations in tandem with electronic warfare capabilities overwhelming forces equipped with Russian air defense equipment.

In the final arithmetic, it has been estimated that the dollar value of Haftar’s Pantsir losses totals an eye-watering $140 M. Estimates for total losses in the region to date, the vast majority of which have occurred this year, are even more astounding – and according to some reach as high as 23 Pantsir systems destroyed.

Yet, while assessing these losses, an important caveat must be made: air defense is ultimately a function of capable equipment and properly trained personnel. In the latter category, the operational capabilities of conscript armies in failed states such as Libya and Syria must not be compared to those of modern professional militaries.

As the dust settles on the Pantsir S1’s catastrophic month in Libya, it has become abundantly clear that Russia’s new system is not a game changer in terms of SHORAD capabilities, nor a credible defense against large scale UAV operations in contested environments.

The continuous stream of viral footage of Israeli and Turkish strikes on the system has made it into the global news cycle and trended on social media on numerous occasions. These images will certainly reverberate through the defense industry and acquisition communities around the world and haunt the reputation of the Pantsir with customers for years to come.

Nevertheless, it is also clear that the Russian military has long term designs for the system and its technology. Cognizant of the role of drones on the battlefield, Moscow will certainly examine the operational performance of the Pantsir in the hands of its proxies and work to improve its capabilities through new versions and variants.

As news emerges of Moscow deploying MiG-29s into Eastern Libya, one should expect Russian Pantsirs to soon follow, ready to provide point defense. Given the system’s current proliferation around the world, the Pantsir will continue to be a fixture on future battlefields. Until the Pantsir S1’s flaws are finally addressed, do not be surprised if the system suffers a few more disasters along the way.

Altan A. Ozler is a professional in the US defense industry. He holds a Master of Science in Foreign Service and a Master of Business Administration from Georgetown University. His areas of scholarly focus include geopolitics, Russia, China, military modernization, European security, and Turkey. You can follow him on Twitter @OzlerAltan.

This article was first published by RealClearDefense.