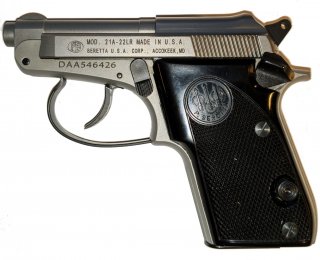 Beretta is a strange brand for me. For the longest time, I knew who they were, but I could really only name one gun from them: the M9. I’d seen it all the time in movies and video games mostly. As I got more into firearms, I finally took a good look at Beretta’s catalog and left feeling like I’d missed out. I was particularly interested in the 21A, a .22 caliber pistol. I’ve was looking for a new .22 plinker so I picked it up. Is that Beretta 21A an underrated pistol or something best left to the wayside?

The 21A really is a beauty in my opinion. I like the shape, I like the grips, I like basically everything except for the trigger guard. It’s massive relative to the rest of the pistol. This is likely for safety reasons so it gets a pass from me. I do have another gripe, but this is functional rather than visual. The magazine release sits in a weird spot at the rear bottom of the grip. It doesn’t function poorly or anything, but it definitely feels like an odd choice. Other odd features include the tip-up barrel. I haven’t seen any firearms like this outside of your run-of-the-mill break-action shotguns and rifles. It’s a cool function that allows you to chamber a round without racking the slide. Slightly superfluous? Yes. Cool? Also yes. Oh, and it has a threaded barrel for all your suppressed .22 needs.

The accuracy on this pistol is pretty solid too. It wasn’t too hard getting solid groups at twenty-five yards and under. Shots started to falter out past that, but I’d attribute that to myself more than anything. I’d wager the trigger probably helps that accuracy. The double-action trigger is a bit heavy for my liking, but the single-action is definitely clean and pretty crisp. Not the best, but better than average. The sights, however, are definitely below average and some difficult to use since they’re so small.

It’s small enough to conceal if that’s what you want to do. I’m personally not comfortable carrying around a ballistically inferior caliber, but anybody who does shouldn’t have any issues keeping this thing under the radar.

But most importantly for me is the fact that this pistol is just too much fun to shoot. I almost couldn’t keep my hands off the 21A on range day.

I think the Beretta 21A Bobcat is a fantastic .22 caliber pistol. It has some interesting features like that tip-up barrel. It’s not the perfect pistol in every aspect like the weird mag release and tiny sights, but can definitely make up for that reliability, accuracy, and that fun factor. It’s also not too bad in price as far as pistols go. It’ll run you $450, but I reckon it’s worth it especially if you love .22 and Berettas.