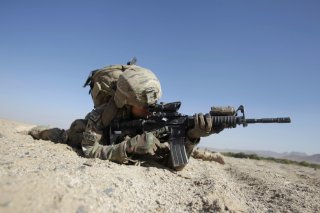 “Achieving greater energy on target.” That’s exactly what the U.S. Army wants from the Next Generation Squad Weapon (NGSW), a new rifle being pursued by two distinct industry teams. The two finalists for the contract are Sig Sauer and a recently announced partnership between Beretta USA and LoneStar Future Weapons (LSFW), a True Velocity subsidiary.

Intended to replace the Army’s M4 carbine and M249 squad automatic weapon, the NGSW is designed to massively increase lethality against a wider range of defended targets. Notably, the NGSW will not be chambered in the traditional 5.56x45mm NATO cartridge. Army developers say that the new weapon will be lighter, more effective at long-range, and “much more lethal” than the existing weapons it is being engineered to replace.

Beretta already produces the Army’s M9 pistol, and the company no doubt seeks to leverage its experience to become the supplier of the NGSW.

The concept for the NGSW emerged after the Small Arms Ammunition Configuration Study was carried out in 2017. Among other priorities, the study called for advanced fire-control technology and bullet design to “not only defeat threat capabilities but also ensure overmatch.”

To achieve this, the Army called for a weapon with improved ergonomics, signature-suppressing capabilities, data power transfer, modern rail designs, a lightweight case, and “increased performance at range.”

Beretta’s partnership with LSFW is a natural marriage of Beretta USA’s “rich history of delivering high-quality, rugged, reliable weapons” and True Velocity’s “innovative approach to advanced weapon and ammunition development,” according to a statement from True Velocity Chairman and CEO Kevin Boscamp. Boscamp says that the partnership will put the team in “an optimal position to lead the global modernization of small arms and ammunition.”

The Beretta and LSFW team will be testing and developing the RM277, a bullpup-style rifle. In addition, Beretta will take a leading role in developing variants of its RM277 for sale to U.S. allies and civilians in the United States. Capable of providing stable and accurate automatic fire, long-range effectiveness, and reduced recoil, the RM277 offers maximum lethality in a compact, lightweight package.

A June 2021 article from Bulgaria’s National Military University specifies a number of tactical advantages associated with the True Velocity 6.8mm cartridge, including its lightweight metal base and polymer body.

“The polymer used in the cartridge case can be significantly lighter than a metal one,” writes Miroslav Dimitrov. “The polymer is significantly cheaper to manufacture and has much better insulating properties than metal. The polymer is also corrosion resistant which means that the ammunition can be stored for a much longer time.”

The Beretta-LSFW NGSW offering is intended to align with all of the Army’s requirements. For instance, the Army specified that the NGSW needed a sound suppressor to reduce the weapon’s acoustic signature. Bulgaria’s National Military University notes the Beretta-LSFW team’s introduction of a sound suppressor as well as improvements in barrel design. These advancements will allow soldiers to improve their accuracy and grouping.