Next-Generation Squad Weapon: What Will the Army Choose for a New Rifle? 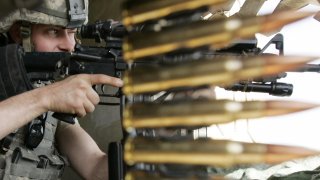 The Next-Generation Squad Weapon (NGSW) rifle is intended to supplement and eventually replace the current M4A1 carbine and the M249 Squad Automatic Weapon. Army developers say the new weapon will be longer range, lighter weight, and much more lethal by “achieving greater energy on the target.”

The concept for the NGSW emerged following a 2017 U.S. Army Small Army Ammunition Configuration (SAAC) study. Among other priorities, the study called for advanced fire-control technology and bullet design to “not only defeat threat capabilities but also ensure overmatch.”

Subsequently, the Army launched two concurrent yet distinctly interwoven acquisition efforts—one with a 6.8-millimeter round and one on a fire-control system. Since the program has added funding and awarded three prototyping contracts to gun makers.

“A project opportunity notice resulted in several vendors exceeding government expectations and providing innovative approaches to bridge the gaps found in the SAAC study,” Ottmar said in the Army video.

In 2019, the Army awarded a $64 million NGSW contract to General Dynamics-OTS, Sig Sauer, and Textron. Beretta had teamed with GD-OTS and composite-cased ammunition manufacturer True Velocity, embedding engineers with their design teams to support the effort.  GD has since novated its contract to LoneStar Future Weapons, a wholly-owned subsidiary of True Velocity parent company TV Ammo, Inc.

As part of the collaboration, Beretta also manufactured components for the second round of NGSW prototyping testing and performed a range of analyses, including numerical assessments, finite-element analysis, and simulation.

“The LoneStar offering, in conjunction with our Tier 1 strategic partners True Velocity and Beretta, is an evolution in soldier lethality, not just a change to an existing weapon system,” Craig Etchegoyen, the chairman of LoneStar Future Weapons, said in a written statement. “The new reality of Great Power Competition now confronting America’s warfighters requires nothing less.”