The Best Streaming Services You Might Not Know About 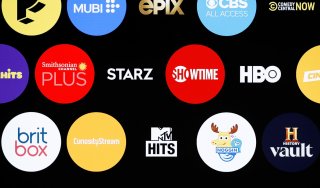 In the age of coronavirus, social distancing and stay-at-home orders, a lot of Americans are spending quality time with their favorite streaming services. According to a study this week, the biggest streaming services all posted subscription increases in the opening days of the quarantines.

But there are many other, unheralded ones as well, to be found in the lower reaches of your Roku, Apple TV, or smart TV menu. These are some of the better ones:

- Pluto TV. An ad-supported service that was bought last year by Viacom/CBS, Pluto TV is structured like a cable TV guide menu. You scroll through, and there are hundreds of channel choices, grouped by "Movies," "Entertainment," "News," "Comedy," "Sports," "Kids," and much more.

Pluto TV offers a lot of things that you might have wished for when you were a kid. An entire channel that's directed entirely to James Bond movies. Another that's just a 24/7 loop of Mystery Science Theater 3000 episodes. The sports tier features, alongside more traditional channels, is the kind of stuff that would have been on ESPN in the early '80s. And the MTV channels, unlike the actual MTV, actually shows music videos.

- If you're an MST3K fan who wants to choose the episodes you want, many of them are available on another free channel, Shout Factory TV.

- Kanopy. Kanopy is another small miracle. Using the slogan "Thoughtful Entertainment," a channel that provides high-quality movies for free. All you need is a library card from any participating library, and it'll give you access to four movies a month-not including a large cache of stuff that's in the "credit-free viewing" section.

Kanopy offers lots of movies of an artsy bent and documentaries, many of which arrive on the service only months after they were in theaters.It has a deal with the distributor A24 to put their movies on the service, and also offers an "In Memoriam" section, featuring movies by actors or filmmakers who have recently passed away.

- Tubi. Tubi is another free, ad-supported movie channel. As of now, it offers a random mix of new and old titles. But as they say, watch this space: Fox Corporation last month announced plans to acquire Tubi for $440 million.

Fox Corporation sold its movie and TV studio assets to Disney in a deal that closed in 2019, which is why you can find The Simpsons, and decades worth of movies from the Fox movie studio, on Disney+. But the Fox/Tubi deal shows that Fox has some big plans for streaming. A report by The Verge following the deal said that Fox will "use Tubi to offer a large number of its older TV shows and movies for free to subscribers," but won't be jumping into original content. Comcast, for their part, also recently announced the purchase of another obscure streaming service, Xumo.

-  Acorn TV and Britbox. If you're a big fan of British TV, you've got two options. Acorn TV is a subscription service, it offers such marquee shows as Miss Fisher and the Crypt of Tears, and originals Queens of Mystery and Mystery Road.

Britbox, also a subscription service, is officially associated with BBC and ITV, and its top shows include EastEnders and Coronation Street.