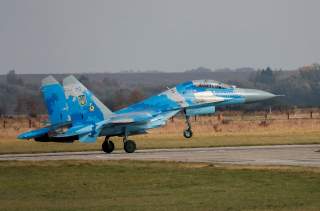 Russia’s Southern Military District (SMD) is conducting a series of high-profile combat exercises in defiance of NATO’s Operation Sea Shield 2019, the latest in an ongoing cycle of military escalation in the Black Sea region.

The Su-27SM is the first upgrade package for the prolific Soviet Su-27, offering expanded air-to-ground capabilities to round out its multipurpose role. Though it certainly hasn’t gotten any younger in the avionics department, the Su-27SM and its predecessor are widely fielded by the Baltic and Black Sea fleets as a plentiful and cost-effective choice for interception runs.

As it turned out, the Tu-160 and Su-27SM drills were only the opening salvo in the Kremlin’s response to Operation Sea Shield. The following day, the SMD reported a massive coastal defenses exercise involving “more than 50 planes and helicopters” and the S-400 anti-aircraft system, as well as the “Bal” and “Bastion” coastal defense batteries. A Beriev A-50 early warning and control AWACS plane--due to be replaced in the coming years with a modernized A-50U boasting a superior Shmel-M radar system--stayed airborne for five hours to direct several of the drills.

Bal is a Kh-35 anti-ship missile launched from a coastal defense platform, whereas Bastion-- or K-300P-- is a mobile defense platform carrying P-800 “Onix” anti-ship cruise missiles. S-400 systems are frequently tested in Crimea, often in conjunction with ancillary missile defense systems like the Pantsir S1 and Tor M1/M2. A combined arms approach may seem superfluous, given that the S-400 exceeds the aforementioned systems in almost every respect. There is, however, a concrete military rationale at play: in a pitched war setting, the S-400 is harder to overwhelm with a saturation attack if supported by secondary anti-air systems. The S-400 can also direct these secondary systems, feeding them tracking information from its search radar.

The Kremlin has made no secret of its displeasure with Operation Sea Shield, NATO’s annual Black Sea exercise; this year’s installment is especially contentious, not only because it was held in the backdrop of the Kerch Strait Incident but also in that it involved a visit to the Ukrainian port city of Odessa. It is only recently, with the 2014 Ukraine crisis, that the northern Black Sea region entered a heightened state of security competition-- namely, an escalatory spiral of Russian military buildup in Crimea on the one hand and NATO Black Sea exercises on the other.

This type of military tit-for-tat is not, in of itself, out of the ordinary; to the contrary, it characterizes the sweep of the Russia-NATO security relationship of the past decade. But what’s rather more uncommon is the Kremlin’s curious forthrightness. Forgoing the customary feigned ignorance that has come to characterize retaliatory exercises, the SMD’s press office minced no words in stating that "the training proceeded against NATO’s naval exercise Sea Shield - 2019, which provided a good background for the Black Sea Fleet and the Air Force and Air Defense units to practice combat tasks in real conditions.” NATO, for their part, insists that Operation Sea Shield 2019 is a “long-planned” exercise that is completely unrelated to events in Ukraine.