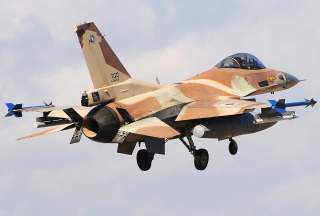 Israeli F-16s clashed with Pantsir and Buk installations in Syria, providing modern Russian air defenses with one of their most challenging combat tests to date.

The skirmishes came as part of a strong Israeli response after the Israeli Defense Forces (IDF) announced that they had intercepted a medium range surface-to-surface missile fired from Damascus by Iranian Quds units.

The IDF stated shortly afterward that they are retaliating with air raids against Iranian munitions storage, intelligence, and training sites, as well as an Iranian military base at the Damascus International Airport. The Syrian army attempted to thwart these strikes with some of the latest products in Russia’s air defense lineup, the Buk-M2E and Pantsir-S1.

The largest concentrated engagement, and the one where the Syrians seemed to enjoy the greatest success, took place at the Damascus airport. Russian state news outlet TASS cited Russian military sources alleging that Buk and Pantsir installations intercepted seven guided air-to-surface missiles fired by four IAF F-16 bombers. "Air defense forces of the Syrian army have repelled an air attack by the Israeli air force on the Duwali international airport in the southeast of Damascus,” said the source. "No damage has been done to the airport’s infrastructure. No casualties or damages have been reported."

Still, seven missiles being intercepted does not mean that only seven were fired. Israel disputes the Syrian and Russian account of “no damage” being done, observing “secondary explosions” around the airport.

Pantsir-S1 is the first in a line of modernized, self-propelled Russian point air defense systems introduced in 2011, boasting a maximum engagement range 20 km and detection range of 30 km. Its 57E6 missiles are supposed to engage enemy guided missiles at a speed of 1,000 meters per second (m/s). While the F-16’s likely fired outside of the Pantsir-S1’s relatively short retaliation range as they’ve done in the past, the S1 should be capable of reliably intercepting the F-16’s Delilah cruise missiles.

The S1’s track record has been decidedly mixed, however. There were several recorded instances of Pantsir systems being struck by F-16’s over the past year. Last week, Israel released a clip seemingly showing another Pantsir-S1 being destroyed during this latest round of IDF airstrikes. Why can’t Pantsir-S1 consistently do in practice what it does on paper? Technical shortcomings are the most immediate explanation, but there others worth keeping on the table until more information comes to light. Random operator error and insufficient training of Syrian crews are within the realm of possibility, while Russian military experts have previously offered more far-fetched explanations: namely, that it was out of ammunition or “simply turned off.” While this can’t account for all prior problems, it is possible that at least some of Pantsir’s performance lapses are against guided bombs rather than cruise missiles.

The other air defense system used alongside Pantsir-S1, Buk-M2E, boasts a greater range of up to 45 km. Firing 9M317 surface-to-air missiles at a speed of up to 1200 m/s (3.5 mach), Russia’s export agency advertises the Buk-M2E as an effective solution against cruise missiles and guided bombs. According to the Russian ministry of defense, Buk and Pantsir destroyed a total of over 30 cruise missiles and guided bombs.

It remains to be seen how, or if, the Russian military adjusts to what seems to be Pantsir’s chronic underperformance in Syria. The three S-300 battalions transferred into Syria in October 2018, in response to the downed Il-20 plane incident, did not take part in these recent skirmishes.