Beyond Immigration: How Countries Contend With Aging Populations 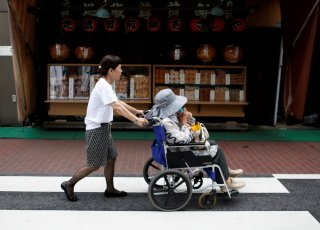 In 1950, the median age of what are today’s most developed regions was twenty-nine years. Many were experiencing postwar baby booms, including Japan, which captured the cover of Newsweek magazine with worries over mass starvation in the face of equally massive population growth. But such population dynamics were short-lived. By 2020, the median age of those regions was forty-two and, by the middle of the next decade, it will be forty-five. This steadily upward trajectory means that, with every passing year, developed states find themselves in uncharted territory, scrambling to develop a menu of viable policy options to either forestall aging itself or its economic effects. One of the proposed solutions is significantly more open borders. Many argue that aging states must bring in more immigrants or face dire consequences. Yet what such discussions tend to disregard is that sometimes states will choose the consequences.

One reason states and societies may be hesitant to increase immigration—or actively oppose it—is that immigration often hastens shifts in ethnic composition. While 76 percent of those U.S.-born identify as single-race white, only 45 percent of immigrants in 2019 did. Changes or perceived changes in ethnic composition affect political behavior as we saw with anti-immigrant voters tipping the Brexit vote. With a shrinking total population and the oldest median age in the world—forty-eight years—the Japanese have thus far decided that the social consequences of immigration outweigh the economic consequences of population aging. The exception is the immigration of care workers as the strains of old-age care are palpable for Japanese families. Immigrants number about 2 percent of Japan’s population, and there are significant institutional barriers to immigrants settling permanently.

Some states are reticent about the ethnic consequences of immigration but find the economic benefits outweigh the social consequences. South Korea, which in recent years has held the world record for lowest fertility rate, has tried to entice ethnic Koreans living abroad to immigrate, similar to Russia. Korean policymakers have been liberalizing beyond ethnic Korean immigrants as one of several policies designed to counter aging.

Examples such as the immigration of care workers implicate a need to analyze the impact of aging on particular sectors. In the United States, construction workers are aging; 40 percent of these workers are between the ages of forty-five and sixty-four, and 65 percent of heavy equipment operators are over forty years old. Even with some productivity gains from automation, there will soon come a day when older construction workers will have to retire. Who will wield the tools for the ambitious infrastructure plans of the Biden administration? We need a broad view of what “immigration” can look like, one that includes temporary, legal pathways, but partisanship has frozen U.S. immigration reform for decades.

Another issue with immigration is the age and aging of immigrants themselves. Few children migrate, and fertility rates for immigrants quickly revert to that of the domestic-born population. Immigrants who stay eventually age. In 2019 (our last year for pre-Covid-19 data), over three-quarters of immigrants to the United States were of prime working ages—eighteen to sixty-four years old. That’s a net positive from a labor standpoint but also means that immigration won’t directly counter America’s population aging.

With fewer workers by the year, immigration seems like a natural solution to a shrinking workforce, but it is no panacea. In fact, there is no panacea—just because a country is aging doesn’t mean increasing immigration is a solution.

Jennifer D. Sciubba, author of 8 Billion and Counting: How Sex, Death, and Migration Shape Our World (W. W. Norton, 2022), is an associate professor at Rhodes College in Memphis, Tennessee.