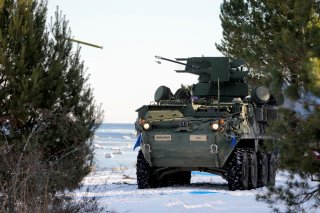 Biden “expressed his condemnation of Russia’s missile strikes across Ukraine, including in Kyiv, and conveyed his condolences to the loved ones of those killed and injured in these senseless attacks,” according to a White House readout of the call.

“President Biden pledged to continue providing Ukraine with the support needed to defend itself, including advanced air defense systems,” the readout added. The Biden administration did not specify which air defense systems will be delivered to Ukraine, nor has the White House clarified whether or not the Monday attacks have prompted new decisions by policymakers on which weapons systems to send to Ukraine. Washington had previously committed to providing Kyiv with National Advanced Surface-to-Air Missile Systems (NASAMS) according to CNN. The United States has taken steps to bolster Ukraine’s air defense capabilities since the Russian invasion began in February, including by sending roughly 1,400 Stinger man-portable air-defense systems (MANPADS) and facilitating the transfer of Slovakia’s Soviet-era S-300 systems.

Biden’s announcement drew criticism from Moscow. “We did not expect any other reaction from the [US] administration,” said the Russian ambassador to the United States Anatoly Antonov, denouncing Biden’s decision to supply Kyiv with additional weapons as “another proof that Washington has secured its own status as a participant of the conflict.”

The White House statement said Biden “also underscored his ongoing engagement with allies and partners to continue imposing costs on Russia, holding Russia accountable for its war crimes and atrocities, and providing Ukraine with security, economic, and humanitarian assistance.”

Russia’s unprecedented Monday strikes on infrastructure targets across Ukraine sparked condemnation from the West. “They are barbaric and cowardly attacks … targeting innocent civilians on their way to work and school in the morning traffic,” said European Union (EU) spokesperson Peter Stano, according to Reuters. United Nations (UN) chief António Guterres said he was “deeply shocked” by the attacks and called them “another unacceptable escalation of the war.”

Ukrainian authorities said the strikes, which reportedly targeted critical energy infrastructure and several government buildings, killed nineteen people and injured 100 more. Russian president Vladimir Putin framed the attacks as an act of retaliation over Ukraine’s alleged bombing of the Kerch Bridge in Russian-annexed Crimea in a Monday meeting of the Russian Security Council.

“It likely was something that they had been planning for quite some time. Now that’s not to say that the explosion on the Crimea bridge might have accelerated some of their planning,” National Security Council Coordinator for Strategic Communications John Kirby told CNN.