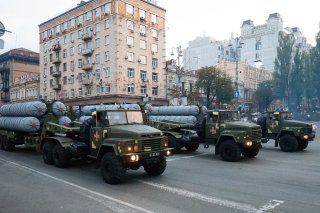 Slovakian officials announced on Friday that they are sending the country’s sole S-300 surface-to-air missile (SAM) system to Ukraine. The announcement follows an agreement with the United States to replace Slovakia’s S-300 with an air defense system of similar capabilities.

“At my direction, and at the invitation of Slovakia, U.S. European Command will reposition one Patriot missile system, manned by U.S. service members, to Slovakia," U.S. defense secretary Lloyd Austin said in a statement on Friday. "Their deployment length has not yet been fixed, as we continue to consult with the Slovakian government about more permanent air defense solutions,” Austin added. Slovakia will be receiving a U.S. Patriot battery that was based in Germany and is being pre-positioned in Poland in anticipation of the transfer. Austin confirmed that the Patriot battery in Slovakia will be manned by U.S. troops.

Only three NATO members—Slovakia, Greece, and Bulgaria—field the S-300 system. The latter two have shown reluctance to directly send major weapons systems to Ukraine; Slovakia is the first NATO member to supply Kiev with a long-range missile system. The S-300 is a Soviet-era missile system that was first introduced in 1978 and is designed to defend against aircraft and cruise missiles. The contemporary Ukrainian military inherited most of its air defense equipment, including its S-300 regiments, from the Soviet period.

President Volodymyr Zelensky and other top Ukrainian officials have repeatedly called for a Western-enforced no-fly zone in Ukrainian airspace. Western governments and NATO chief Jens Stoltenberg explicitly rejected that idea in early March, describing it as a dangerously escalatory step at a time when NATO’s overriding goal is to keep the conflict contained in Ukraine. Kiev has since shifted from pushing for direct Western military intervention to soliciting additional weaponry from NATO, including MiG-29 jet fighters and long-range missile systems to help fend off continued Russian airstrikes across the country.

Ukraine reportedly possessed 100 S-300 batteries on the eve of the February 24 Russian invasion. The Russian military said it destroyed about forty Ukrainian S-300 units at the outset of the war, allegedly dealing a crippling blow to the Ukrainian military’s ability to contest its airspace. The Russian military says it is continuing to whittle down Ukraine’s S-300 inventory, with further kills being reported on a regular basis. Given the reported scale of Ukrainian S-300 losses over the past month of fighting, one additional battery from Slovakia will not significantly impact Ukraine’s long-range air defense capabilities.