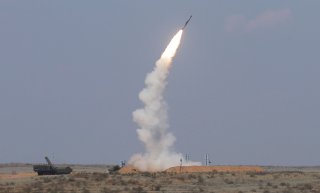 Here's What You Need To Remember: The S-300 was used extensively - and to great effect - by both sides in the 2020 Nagorno-Karabakh War between Armenia and Azerbaijan.

Over four decades after its introduction, the S-300 remains among the world’s most potent missile defense systems.

In the latter stages of the Cold War, the Soviet military became increasingly concerned with the ability of their aging S-25 Berkut and S-75 Dvina systems to counter the North Atlantic Treaty Organization’s advancements in cruise missile technology. Leading Soviet defense manufacturer NPO Almaz—which went on to become Almaz-Antey and designed the S-400 roughly three decades later—was tasked with developing the next generation of Soviet air defense systems. Numerous other Soviet companies participated in sourcing the S-300’s wide array of components. The underlying goal wasn’t simply to raise combat performance across the board, but to drastically cut deployment and redeployment times. The S-300 likewise fell within an ongoing Soviet initiative to streamline their military’s air defenses across its Ground, Navy, and Air Defense Forces.

The baseline S-300P entered service in 1978, boasting a slew of innovative technologies and performance features for its time. Intended primarily as an air defense solution for buildings and other fixed strategic sites, the S-300P boasted a passive electronically scanned array (PESA) and was capable of tracking and engaging several targets at once. The S-300P was followed by the ship-based S-300F and S-300V for the Soviet ground forces. Meanwhile, the baseline S-300P version quickly received a series of upgrades that brought out its full potential. The S-300PS introduced the new, supersonic 5V55R missiles with a maximum engagement range of up to 90km. The later S-300PMU export variant added further improvements, upping the maximum engagement range to 150km; it was also capable of simultaneously engaging as many as six targets. The 48N6 missile, introduced in 1993, can engage targets moving at up to 10,000 kph and boasts a slightly larger warhead of up to 150 kg.

The S-300 was conceived as a partially modular and interoperable platform, with different models capable of working in tandem through central guidance by a nearby mobile central post. Later S-300 models, such as the S-300PMU1, can also be integrated with Russia’s current flagship S-400 missile defense system. The latest and most advanced S-300 models are the S-300VM and S-300V4, bringing a new command vehicle, more radar options, and compatibility with newer, more efficient missiles from the expansive 9M family.

While the S-300 and its dozens of variants compare favorably against its U.S. Patriot PAC-2 and PAC-3 on paper, they do not have an extensive service history. Almost all of what we knew of the S-300’s performance came from real-word testing data— that is, until recently. The S-300 and other air defense systems figured prominently into the Second Nagorno-Karabakh War of 2020. Azerbaijan’s armed forces claimed several times throughout September and October to have successfully struck Armenian S-300 positions, allegedly destroying as many as six of the anti-air systems throughout the war. Azerbaijan also reported that one of their S-300PMU2’s successfully shot down two Armenian Su-25 fighters. Armenia, for its part, claims that its S-300 units have downed several Azerbaijani drones.

Thousands of modernized S-300 variants remain in service across the Russian military, following a mid-2010’s Kremlin push to retrofit and phase out its older and increasingly obsolete stock of S-300P’s. Known for its cost-efficiency and focus on practical performance, the S-300 has gone on to become an export hit: from Egypt to North Korea, both legacy and recent S-300 regiments continue to serve across the world.