The Plight of the Nagorno-Karabakh Peace Process 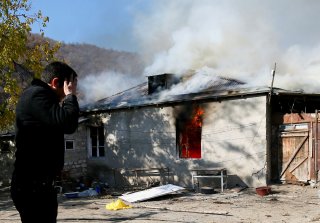 As Armenia enters a second week of mass protests over the Nagorno-Karabakh ceasefire agreement, some in Moscow are losing patience with the government in Yerevan.

Following forty-five days of fighting, thousands of casualties, and over one hundred thousand displaced civilians, the president of Azerbaijan Ilham Aliev, Armenian prime minister Nikol Pashinyan, and Russian president Vladimir Putin signed a ceasefire agreement on Nov. 9 to end the war in Nagorno-Karabakh.

The ceasefire stipulated a total end to all hostilities. With a few notable exceptions, all parties agreed to stop at the territory they occupied at the time of the ceasefire. A significant portion of Nagorno-Karabakh, including the so-called Lachin Corridor that provides a convenient mountain pass route between Armenia and Nagorno-Karabakh, will be occupied by Russian peacekeepers for the next few years; after that initial period, the Russian peacekeeping agreement will be subject to automatic renewal for another five years unless either party preemptively objects.

The ceasefire was not quite a pure status quo post bellum agreement. Though both sides stopped where they currently were, the agreement mandated a few territorial transfers—all of which favored Azerbaijan. While Baku celebrated the agreement as Armenia’s “capitulation,” the ceasefire was overwhelmingly negatively received in Yerevan. Pashinyan, who signed the argument from the Armenian side, described it as a “painful” necessity: “This is not a victory, but there is no defeat until you consider yourself defeated. We will never consider ourselves defeated and this shall become a new start of an era of our national unity and rebirth.” Pashinyan’s growing masses of detractors lamented the agreement, which ratified Armenia’s loss of approximately nine districts, and took to the streets to call for his resignation. The Speaker of the Parliament Ararat Mirzoyan was beaten by a mob, Pashinyan’s residence was broken into, and opposition parties mounted several failed attempts to impeach or otherwise remove the prime minister.

Even as Pashinyan faces severe backlash at home, he is increasingly being subjected to a vote of no confidence by Kremlin-connected commentators and Russian politicians.

Well-known Russian political scientist and politician Sergei Kurginyan accused Pashinyan of sabotaging the Armenian war effort and betraying the people of Nagorno-Karabakh in what amounts to a treasonous dereliction of duty: “Pashinyan was installed for the purpose of giving up Artsakh [the Armenian designation for Nagorno-Karabakh],” said Kurginyan during an appearance on a major Russian television network, implying that Pashinyan acted at the behest of foreign, presumably western, governments, by allegedly ordering the Armenian army to withdraw from the key strategic province of Shusha prior to the ceasefire. He went on to call for Pashinyan’s immediate removal from power: “If we leave [Pashinyan] in power in Armenia,” said Kurginyan, “this man will destroy everything we have achieved there . . . to leave Pashinyan in power is to cede Armenia to NATO.”

“Our first task is to remove this man,” he concluded. Responding to concerns that the overthrow of Pashinyan might lead to the rise of nationalist hardliners and other unsavory factions in Armenian politics, Kurginyan insisted any alternative government is preferable to a continued Pashinyan administration: “There no bad [outcome] for Russia except for Pashinyan himself… just as they once said that Carthage must be destroyed, Pashinyan must be removed.”

Over the past week, milder variations of Kurginyan’s sentiments were widely echoed in Moscow. A slew of commentators, including such power players as Russia Today’s editor-in-chief Margarita Simonyan, questioned whether or not Pashinyan grossly mishandled the Armenian war effort by allegedly snubbing Russia’s early offers of aid and mediation, and instead holding out for western help that never materialized.

The Russian political establishment’s disdain for Pashinyan harkens back to the 2018 color revolution in Armenia when the government of Prime Minister Serzh Sargsyan was overthrown through the efforts of a politically diverse coalition of protesters led by Pashinyan, who went on to become the new prime minister. Dreading a scenario similar to the 2014 Ukrainian revolution—namely, a post-Soviet state realigning with the EU and NATO after undergoing a revolution—the Kremlin was slow in explicitly recognizing the legitimacy of Pashinyan’s government. Following a series of high-profile meetings between Pashinyan and Putin in the Summer of 2018, the Putin administration noticeably mellowed its stance and eventually agreed to deal with Pashinyan on a full diplomatic scale. But a large swathe of Russian commentators never followed suit; they now see, in the Nagorno-Karabakh crisis, renewed prospects for the collapse of Pashinyan’s government.

Despite a growing appetite among some Russian elites for a change of government in Yerevan, the Kremlin has not commented on—or taken any outward steps to affect—Pashinyan’s fate. For now, the Putin administration is principally concerned with Armenia’s continued acquiescence to the ceasefire agreement. Vladimir Putin said in a recent interview that it would be “suicidal” for Yerevan, regardless of whether it’s a new government or the current administration, to back out of the ceasefire.

Embattled at home and criticized abroad, Armenia’s beleaguered prime minister has no plans to step down. Earlier this week, Pashinyan moved to resuscitate his political fortunes with a fifteen-point policy road map that included close Armenian involvement in the Nagorno-Karabakh peace process and a slew of popular domestic reforms.