America Must Reshape Its Future With Nagorno-Karabakh 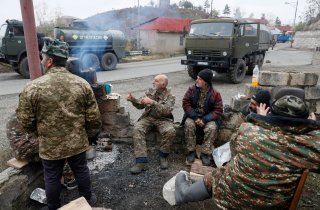 The Russian brokered agreement between Azerbaijan and Armenia concerning Nagorno-Karabakh has put a temporary end to the round of fighting that erupted on Sept. 27. One can only welcome a cessation of violence and the immediate threat to civilians. However, reports of a wave of ethnic Armenians fleeing the disputed region and heading toward Yerevan indicate that the underlying causes of the conflict have hardly been resolved. This may prove to be a fragile peace that depends on the presence of 1,950 Russian peace-keeping forces whose role, as per the agreement, is subject to a five-year time limit. That calendar overlaps with the time frame of the incoming administration. The United States may soon find itself under pressure to become involved, so it is important to evaluate the situation by determining the advantages and disadvantages of the agreement in order to identify opportunities for American foreign policy.

The primary strategic benefit for the United States involves the outcome for Azerbaijan. It has secured a corridor to the west which can facilitate the flow of Caspian Sea energy resources via a pipeline through Georgia to the Black Sea. This is the sole east-west energy route from Central Asia to world markets that does not traverse either Russia or Iran. In light of the importance that both the Obama and Trump administrations placed on the threat of Russian energy blackmail associated with the Nord Stream 2 pipeline, the Azeri energy route takes on considerable importance in terms of global energy politics.

A further positive outcome for the United States involves the Iranian dimension. Despite Teheran’s consistent efforts to pursue regional hegemony, it surprisingly refrained from intervening in the conflict. Not only did Iran prove powerless to exercise influence in its immediate neighborhood, but Azerbaijan’s campaign to solidify control over Nagorno-Karabakh also resonated positively with the large Azeri minority inside northern Iran. Intra-Iranian ethnic tensions or even the prospect of Azeri irredentism may have constrained Iranian foreign policy: southern Azeri solidarity with Azerbaijan, with its very public ties to Israel, stood in the way of Iran doing much at all.

Yet despite these silver linings--the energy corridor and the sidelining of Iran—the net effect of the outcome of the Nagorno-Karabakh conflict must be considered negative from the standpoint of American strategic interests. Theoretically the United States, France and Russia chair the Minsk Process, established in 1992, with the responsibility to oversee a resolution of the dispute. However, the current agreement between Azerbaijan and Armenia was fashioned by Moscow alone: western diplomacy has been marginalized.

Moreover, the enforcement of the agreement involves the deployment of Russian troops into the disputed territory. Russia has reasserted its clout in the Southern Caucasus, just as it has done in Syria and Libya, not to mention Crimea and eastern Ukraine. While it does not generally have the power or resources to establish the conditions for permanent peace, Russia has repeatedly acted as a decisive player in post-Soviet space and far beyond. In the great-power competition between the United States and Russia, Nagorno-Karabakh amounts to one more step in the expansion of Russian influence and Vladimir Putin's effort to regain the influence that Russia lost at the end of the Cold War.

Russia has also gained ground in Armenia. The government of Prime Minister Nikol Pashinyan came to power democratically in Yerevan in 2018 with the hope of building stronger ties with the West. Yet the military defeat by Azerbaijan forced Pashinyan to concede, effectively ceding Armenian claims in Nagorno-Karabakh. He now faces an irate public. Whether he can retain power remains to be seen, yet the dynamic is unmistakable. The pro-western leader Pashinyan bears the blame and is weakened, while Russian power expands. We are witnessing a new Brezhnev doctrine: where Russia once was, there shall she return.

The West has also lost ground with regard to Turkey, which backed Azerbaijan as part of President Recep Erdogan’s ambitions for a greater regional role. A particularly sharp conflict has developed between Ankara and Paris, where French president Emmanuel Macron criticized Turkey’s role, at the same time as he launched a renewed debate over Islamism, in the wake of terrorist attacks in Paris and Nice. Erdogan seized the opportunity to portray Macron as the enemy of Islam. Although this is a war of words only, it is bitterly dividing two key NATO allies—the nuclear power France and Turkey, the size of whose military is second only to the U.S. within the alliance. The ultimate decision over borders in the South Caucusus may not seem a matter of great importance in Washington, but this internal dispute within NATO has the potential to erode a key institution of America’s international security architecture. Chalk this up as another Russian win.

While the agreement involves Russia, Armenia and Azerbaijan, it also inevitably establishes the grounds for interaction between Russia and Turkey. Erdogan in fact has announced that Turkish forces will play a role in overseeing the peace, although the details remain unclear. To the extent that Russian-Turkish cooperation emerges, a further deterioration of relations between Washington and Ankara will result. It is however also possible that Russian-Turkish proximity in Nagorno-Karabakh becomes the source of tension and conflict between them, which could push Turkey back toward the West. U.S. diplomacy could explore this prospect.

A primary goal of American foreign policy should be mending the damage done to relations with Turkey. There have been missteps on both sides, but most egregiously the Obama administration’s ill-considered decision to ally with those Kurdish forces that Ankara regards as a terrorist threat. Matters have grown worse since then. Washington should therefore look for opportunities to repair the damage. The Nagorno-Karabakh conflict may yet provide America an opening for an indirect approach to Turkey, while also pushing back against Russian expansionism.

Russell A. Berman is a senior fellow at the Hoover Institution where he co-directs the Working Group on the Middle East and the Islamic World.