The Big CBS Democratic Debate Had No Clear Winner 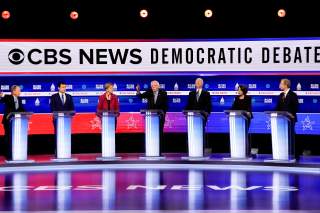 Tuesday night’s Democrat debate offered no clear winner, but continued to spotlight the least appealing characteristics of the Democrat field.

Former New York mayor Michael Bloomberg, whom most analysts believe performed poorly in his inaugural performance in last week’s debate, did marginally better. However, he didn’t do well enough to change perceptions of him significantly.

Bloomberg was still on the defensive about the stop-and-frisk police tactic that helped make New York safer from crime. The CBS News moderators contributed to this dynamic by inviting the other candidates to call him racist in turn.

Bloomberg apologized for the tactic, even though a 2013 poll of voters in liberal New York showed overwhelming 77 percent support for the tactic. Two-thirds of black voters wanted the tactic retained. Are they racist by the standard of today’s Democrats?

Bloomberg would have attracted more centrist votes by showing how supporting cops—something today’s progressives seem loath to do—actually decreases the type of crime that is most likely to victimize minorities. Instead, he said he met with black leaders to discuss how he can better “position himself.”

Bloomberg also was still on the defensive about women in the workplace he offended over the years. He has failed to appreciate the lesson that former Senate Majority Leader Trent Lott learned the hard way: once one begins apologizing to the professionally outraged, there is no end. True to form, Senator Elizabeth Warren refused to accept Bloomberg’s attempt to cave on the issue of cancelling non-disclosure agreements that his former employees signed.

One of several areas in which there was a decided lack of diversity on stage was on the issue of gun control. Again the liberal CBS News moderators did the Democrats no favors in declaring a “gun crisis” and presenting more gun control, which is unconstitutional and ineffective, as the obvious solution.

All of the candidates agreed. Former Vice President Biden vowed to hold gun companies liable for damage caused by the criminal misuse of their products. That is a backdoor way to ban gun sales, as it would put gun manufacturers out of business. Democrats often think gun control is a winning issue for them, and always get burned, especially in middle America. That is why in the 2008 election, Barack Obama wisely all but vowed not to pursue the matter.

Further to guns, Biden said they have killed 150 million Americans—just under half the U.S. population. A slip of tongue can be forgiven, but it was Biden’s second big one in a day. Earlier he yelled at a crowd that he was running for the Senate, which he last did twelve years ago.

At times, Biden looked statesmanlike just because he wasn’t shouting over the other candidates, or gesticulating wildly to get the moderators’ attention. Inexplicably, his opponents let him off the hook when he vowed to be tough on China on issues like climate change, transparency, and undermining U.S. technology and infrastructure. The eight years of the Obama-Biden administration tell a very different tale.

Similarly, no one called out Warren when she repeated a probable fiction about being fired from a teaching job in 1971 because she was pregnant. This mendacity rhymes with Warren’s longtime false claims of being a Native American, which even included plagiarizing recipes for a book titled “Pow Wow Chow.” You can’t make this stuff up. The only plausible explanation for going easy on Warren is that she pulls some votes from fellow radical Bernie Sanders.

After a complete absence in last week’s debate, the second hour of this joust delved into foreign policy. Staking out positions popular with campus radicals, Sanders expressed openness to reversing President Trump’s decision to comply with a law requiring shifting the U.S. embassy from Tel Aviv to Jerusalem. Despite previously calling for a foreign policy that “privileges diplomacy and working collectively with allies,” Sanders called Israeli Prime Minister Bibi Netanyahu a racist. However, he recovered somewhat by diverting an attack on him for being soft on China onto Bloomberg for his apologia of China’s communist government and quaint belief the country’s rubberstamp National People’s Congress (misidentified as the Politburo) holds Chairman Xi Jinping accountable.

Most of the candidates condemned Trump’s handling of North Korea, despite an inability to offer an alternative that hasn’t previously failed. Pete Buttigieg spoke abstractly about changing “the balance of power” in the Middle East, while reiterating his brief military experience. Warren came across surprisingly moderate, declining to deprecate the military and urging the use of various tools of national power to achieve ends. No one mentioned radical Islam, which would be politically incorrect.

Ultimately, the debate had all of the noise but less of the energy and revelation of last week’s debate in Las Vegas. No one really won or lost. Buttigieg and Bloomberg both tried to sound the alarm that nominating a radical like Sanders would not only keep a Republican in the White House, but also have an impact down the ballot, including congressional and state-level contests. For now, Democrat primary voters aren’t listening.