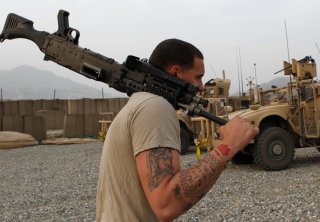 Following years of speculation, the U.S. Army has announced that it is relaxing its policies about tattoos for new recruits. This comes as the Marine Corps considers a similar policy change.

According to the Army’s announcement, Secretary of the Army Christine E. Wormuth has updated the directive when it comes to what is allowed. The policy change was explained in full in a more detailed report.

“The Army will now allow Soldiers to have one tattoo on each hand that does not exceed one inch in length,” the announcement said. “Soldiers also have the option to place one tattoo no larger than two inches on the back of their neck and one, inch-long tattoo behind each ear. Additionally, tattoos can be impressed between fingers as long as the designs cannot be seen when the fingers are closed.”

Recruits were previously required to request waivers for tattoos in those locations, with more than 600 such waivers filed so far this year. However, facial tattoos will remain forbidden, as will body art that extends above a soldier’s collar.

“We always review policy to keep the Army as an open option to as many people as possible who want to serve,” Maj. Gen. Doug Stitt, director of military personnel management, said in the Army’s announcement. “This directive makes sense for currently serving Soldiers and allows a greater number of talented individuals the opportunity to serve now.

Sgt. Maj. Ashleigh Sykes, uniform policy sergeant major, also addressed the issue. “Everyone has a different reason for getting a tattoo,” Sykes said in the Army’s announcement. “Some see it as art, some see it as individuality, and some may even have cultural tattoos. Tattoos are more [accepted] now; it’s a change in society.”

The new policy also outlines consequences for soldiers who get disallowed tattoos. "Soldiers who have tattoos that do not meet the service’s restrictions will be counseled,” the Army said. “They will then have 15 days to explain to commanders whether they will have the tattoos removed or altered. Soldiers who do not comply could potentially face separation.”

Operation Military Kids earlier this year looked at how the tattoo policies differ across the different military branches. The site noted that the Navy has a more relaxed policy than some other branches.

The report featured a quote from Master Chief Petty Officer of the Navy Mike Stevens. “We just got to the point where we realized we needed to be honest with ourselves and put something in place that was going to reflect the realities of our country and the needs of our Navy,” Stevens said. “We need to make sure that we’re not missing any opportunities to recruit and retain the best and the brightest because of our policies.”