Boeing's New F-15X: A Strike Eagle on Steroids? Here Is What We Know. 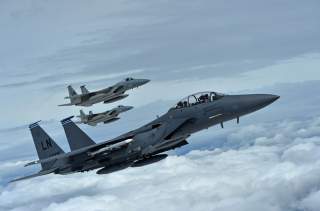 Boeing is considering producing a new advanced version of its F-15 Eagle for the U.S. Air Force, according to various news reports.

Defense One was the first to report the news. On July 16, Defense One’s Marcus Weisgerber revealed that Boeing is “quietly pitching the U.S. Air Force” on the new F-15X model. Weisgerber noted that the company appeared to be trying to replicate the strategy it used to convince the Trump administration to purchase more F/A-18s.

The Defense One report only had a few details about the ways in which the F-15X would differ from earlier models of the airplane.

On July 25, The Drive’s Tyler Rogoway provided a more detailed follow up about the proposed new jet. According to Rogoway’s sources, the idea for the more advanced F-15 did not originate from Boeing.

Instead, a year and a half ago the U.S. Air Force approached both Boeing and Lockheed Martin about fielding a new cost-effective aircraft to help reverse the shrinking size of the Air Force’s fleet.

The Air Force wanted a plane that was “cost-effective both in terms of operation and acquisition, very low-risk, and most of all, it would need to be non-disruptive to the larger F-35 procurement initiative.” This would complement rather than help replace some of the F-35s.

The purpose, according to Rogoways’ sources, was to provide a better high-low capability combination. That is, a recognition that not all missions will require stealthy fifth-generation aircraft like the F-22 and F-35. Cheaper fourth-generation aircraft like a new designed F-15 would be better for carrying out a host of different missions, such as dealing with terrorist and militant groups.

As far as the F-15X’s specifications, Rogoway’s “sources describe the aircraft as a single seat variant of the latest F-15 advanced Strike Eagle derivative—the F-15QA destined for Qatar—but it will also integrate many of the features and upgrades that the USAF intends (or intended as it may be) to include on its nearly four-decade-old F-15C/D fleet.”

One feature the F-15X will not have is stealth. It will continue to be a fourth-generation fighter with no low-observable enhancements. In other words, this would not be the plane to fight on the front lines of any conflict with a capable adversary like Russia or China.

Purchasing such a non-stealthy fighter would be a huge departure for the U.S. Air Force. Since 2002, the USAF has only bought fifth-generation fighters. This has made some observers skeptical of the idea that the U.S. Air Force is interested in such a plane.

Noting the F-15X reports, Dave Majumdar said that “It’s amazing this Boeing sales pitch is being swallowed hook, line and sinker by the trade press . . . The Air Force will never buy this jet.”

He added: “It is useless inside heavily defended airspace if we are dealing with any sort of real military force.” And if the United States is simply targeting terrorist or insurgent groups, then a plane like the F-15X would be an “expensive extravagance.”

If the Air Force is interested in the F-15X, it’s also fair to question whether they could be purchased without cutting into the procurement of the F-35. After all, defense budgets are limited. Furthermore, this would not be the first time that interest in the F-15 has come at the expense of the F-35. Israel also appears set to purchase more F-15s instead of additional F-35s.