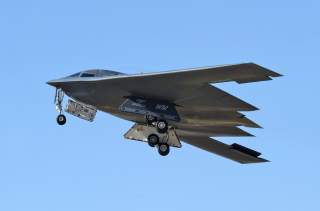 For the CSBA plan to become reality, the Air Force would have to request, and Congress would have to approve, potentially hundreds of billions of dollars in additional spending over the next few years.

The U.S. Air Force should cut some types of fighters and more than double its fleet of long-range stealth bombers in order to better do battle with Russian and Chinese forces, one influential think tank advised.

Those are just two recommendations in a study that Congress in 2018 commissioned from the Washington, D.C.-based Center for Strategic and Budgetary Assessments.

The CSBA report briefly appeared on the U.S. Defense Department's website before someone removed it. Defense News reporter Valerie Insinna summarized the report in a March 20, 2019 story.

The report recommends the Air Force double down on stealthy, long-range aircraft and cut back on non-stealthy, short-range planes, while also growing the drone fleet at the expense of big, old, manned surveillance planes.

The CSBA report overlaps with the Air Force's own 2018 proposal to grow the force from 312 to 386 operational squadrons in order to meet "the reemergence of long-term, strategic competition with China and Russia."

"The Air Force’s imperative is to compete, deter and win this competition by fielding a force that is lethal, resilient, rapidly adapting and integrates seamlessly with the joint force, allies and partners," the flying branch stated.

But while the Air Force proposal and the CSBA report champion the same stealthy and long-range systems, the think tank recommends a much bigger overall fleet.

Where the Air Force wants to grow from nine bomber squadrons in 2019 to 14 by 2025, CSBA advised the flying branch to stand up an additional 10 bomber units for a total of 24.

The Air Force began studying the PCA plane in 2017 and has yet to formally define the type or put serious money into its development. The CSBA report urges the service to hurry up with the PCA at the expense of the current F-35, which is stealthy but lacks range.

The Air Force wants more than 1,700 F-35s, but CSBA appears to be happy with just over half that number.

Pointedly, the CSBA report rejects the idea of buying new copies of older, non-stealthy fighter types such as the F-15EX. The Pentagon forced the Air Force to include the first of 144 new F-15EXs in the branch's 2020 budget proposal. The new F-15EXs would replace 1980s-vintage F-15Cs and Ds that mostly perform defensive air patrols over the United States.

Forget it, CSBA advised. "The Air Force should consider replacing some retiring F-15C/Ds with modified F-35As as a bridge to its future air superiority family of systems," the report states, according to Defense News’s Insinna.

CSBA recommended that the Air Force hang on to its several dozen RQ-4 spy drones and RC-135 manned spy planes and roughly 250 MQ-9 attack and surveillance drones. But the flying branch should add another 50 MQ-9s and complement these non-stealthy intelligence, surveillance and reconnaissance aircraft with a radar-evading "Penetrating ISR" drone.

It's possible the Air Force already possesses a stealthy spy drone. In 2013, Aviation Week reporters Bill Sweetman and Amy Butler revealed what they described as a "large, classified unmanned aircraft" called the RQ-180. "It demonstrates a major advance in combining stealth and aerodynamic efficiency."

The stealthier, longer-range Air Force that CSBA endorsed undoubtedly would be extremely costly. The extra B-21 bombers alone could cost $113 billion over the current bomber-acquisition plan.

It's worth noting that the Air Force hasn't asked for extra money even for its own expansion plan. The branch's 2020 budget proposal requests enough cash to maintain, but not add to, existing squadrons.

For the CSBA plan to become reality, the Air Force would have to request, and Congress would have to approve, potentially hundreds of billions of dollars in additional spending over the next few years.